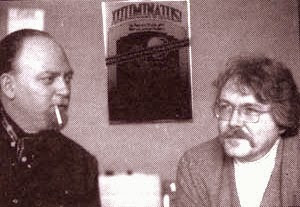 I've obtained pieces from other folks about Illuminatus!, but I have a few thoughts of my own about the work, and the discussion that's unfolded at this blog:

1. One of the classic tests of a novel is whether you can read it over and over again and find new things. Illuminatus! meets that test admirably. I have read it several times now, and each time I find elements to struggle with and sections to stimulate me. I am sure I would be able to read it again in a couple of years.

Because of the format of the online discussion group, I did not have the luxury of being able to pick and choose which sections of the book to write about — I had to to write about all of it. Nonetheless, I was able to find something to say every time. In postings where I didn't have much say, it was often because I had discussed a similar passage earlier. My commenters very often had plenty to offer.

And as the comments section proved, there are many aspects of Illuminatus! to talk about. It has a wealth of literary allusions. Many of these allusions can be tied specifically to James Joyce. It draws deeply from Discordianism. It has a great deal of anarchist and libertarian theory. There's a lot from the Kabbalah. A great deal is drawn from magick. The authors are very well acquainted with the work of H.P. Lovecraft. And so on.

2. All of the weekly postings, and some related articles, are listed on the Illuminatus! online reading group page. I have included links to all of Adam Gorightly's postings on the group from his own page. (By my count, he did 22 different articles on Discordian aspects of Illuminatus!) If you become interested in Discordianism, I suggest obtaining a copy of Adam's book on the origins of Discordianism, and also hunting up his two Kerry Thornley biographies. I'll continue to put relevant postings on the page, but see also the listings under "Illuminatus Resources." Although I issued a press release and deployed social media, I wasn't able to get a lot of Internet attention; I could not, for example, get any really well-known blogs to mention the ongoing discussion. Maybe someday the archive will be discovered.

Online discussions of Coincidance, Masks of the Illuminati and Quantum Psychology also are archived, and you can still contribute fresh comments to any of the posts if you are reading one of those books.

3.  I am deeply indebted to every one of you who took time, over the course of more than a year, to make comments at the Illuminatus! postings. And if you chose only to read and lurk, that's OK, too. Some of you took the time to weigh in with very meaty postings. I hesitate to single out folks by name for fear of leaving someone out, but you know who you are. In many weeks (if not most, or even all) the comments were better than my individual post.

4. Let's take a moment to remember that Illuminatus! started from a suggestion from Robert Shea.

RAW talking about his Playboy magazine days: "Bob Shea and I used to go out for drinks every Friday evening after work and solve all of the problems of the world over a few Bloody Marys. We were talking about all of these kooky conspiracy theories and Shea said, 'Why don't we write a book about all the craziest conspiracy theories.' And eventually the Illuminatus trilogy developed out of that."

I'm about to gripe in this piece that Robert Anton Wilson is neglected by the literary world at large, but maybe the writer who is REALLY neglected is Robert Shea; I don't notice a lot of Robert Shea fan sites on the Internet, except the official site maintained by Shea's son. I'll develop this as a longer rant sometime, but for now, let me just repeat that if you like historical novels, you are missing out if you haven't read All Things Are Lights.

5 . In one of his interviews (I can't remember now which one, and couldn't find it when I went looking for it) Robert Anton Wilson says he doesn't think Illuminatus! has really been the success that it should have been. I tend to agree. Yes, it has remained in print for 30 years, yes it is a cult novel that has persisted in attracting an audience, but it still has not attracted the large audience I believe it deserves. (I did get critic Ted Gioia to write about it when I sent him a copy).

There are other writers I really like, but they don't need any help from me. Neal Stephenson is so successful he can ignore requests for interviews, even when he's on tour ostensibly promoting his latest book. Iain Banks didn't get the audience he deserved in the U.S., but he was big in Great Britain. Cory Doctorow is so good at self promotion, he doesn't need promotion from anyone else! I like to publicize writers who seem neglected, such as George Alec Effinger.  My sense that Robert Anton Wilson deserves a large audience is an important motivation for this blog.

The Sea Owl was moored in St. John's, Newfoundland yesterday as we drove past the waterfront. My wife had me explain how Robert Mercer made his money, then I told her how I heard that his crew of Yankee Dandy landsmen let this Norwiegian-built 62 footer get grounded on a shoal in low tide off Nova Scotia last month with Ed Kennedy (?) at the helm, and that July 11 was Mercer's birthday. The local media will not identify him. Independent media in Nova Scotia lampooned him.
If Bob and Bob were both alive today they would riff on the transatlantic cable that allows these financial wizards to game the system. They would laugh and argue that these parasites on our money serve a purpose?
How could these ultra powerful Americans siphon billions by mastering millisecond timing at the helm of hedge funding, and not be able to operate a distended pleasure craft?
Why are us geniuses so close to broke? I can even walk, and chew gum simultaneously? Why...
It must be an affect of living within the lasanum. Those who know the territory, can wipe their ass in the map and get on with life. I just want people to have the basics, not reduce rich people from getting richer. They get funnier the more money they get. The inverse of the Saturday Night Live effect.
Thanks Tom, love the blog, I also like reading Michael Johnson, Oz Fritz and Nick Herbert's blogs. Thanks for a great year of Illuminatus! discussion.

Those who know the territory, can wipe their ass in the map and get on with life-- Brilliant!

This seems as good a place as any to put this:
http://imgur.com/a/22uaH

someone created Hagbard's sub on Minecraft