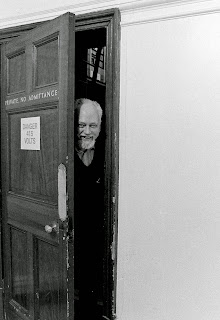 Today is Robert Anton Wilson Day, a holiday which, as you can read here, was originally proclaimed as a local event in Santa Cruz, Calif., but which has evolved into the gala international holiday that we recognize today. (July 23, 1973, is the date that RAW thought he might have been contacted by aliens from Sirius, as detailed in the experiments discussed in Cosmic Trigger 1.)

How will you spend the holiday? I am at work, but will listen to Beethoven later today.

Here again is a favorite quote:

"The Western World has been brainwashed by Aristotle for the last 2,500 years. The unconscious, not quite articulate, belief of most Occidentals is that there is one map which adequately represents reality. By sheer good luck, every Occidental thinks he or she has the map that fits. Guerrilla ontology, to me, involves shaking up that certainty. I use what in modern physics is called the 'multi-model' approach, which is the idea that there is more than one model to cover a given set of facts. As I've said, novel writing involves learning to think like other people. My novels are written so as to force the reader to see things through different reality grids rather than through a single grid. It's important to abolish the unconscious dogmatism that makes people think their way of looking at reality is the only sane way of viewing the world. My goal is to try to get people into a state of generalized agnosticism, not agnosticism about God alone, but agnosticism about everything. If one can only see things according to one's own belief system, one is destined to become virtually deaf, dumb, and blind. It's only possible to see people when one is able to see the world as others see it. That's what guerrilla ontology is — breaking down this one-model view and giving people a multi-model perspective."

Great quote. Where's it from?

It's from this interview: