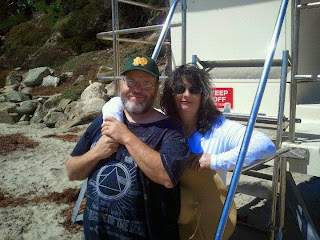 [Eric Wagner lives in the Los Angeles area and is a teacher and writer. He was a longtime intimate of Robert Anton Wilson, a relationship reflected in his book, An Insider's Guide to Robert Anton Wilson, the only book-length study so far of RAW's work -- The Management.]

I have enjoyed the process. I notice that the first few weeks got a lot more comments, but we have made it to the end. (Actually, as I begin writing this piece on June 30, 2015, I have not yet done next week’s reading of the final few pages.) I have gotten behind from time to time, and I haven’t commented as much as I might have, but I have found it a fruitful process, and thank you, Tom, for playing the role of Ringmaster. (Perhaps behind the mask of “Tom Jackson” we will find a super intelligent computer. It would not surprise me too much.)

Reading the book reminds me of the first time I read it back in 1982 in three volumes. I find it interesting how reading books in different volumes affects my perception of the works. The first few times I read both Illuminatus! and The Lord of the Rings I read them in three volumes and thought of them as “trilogies”. The most recent times I’ve read both works I’ve read them in single volumes and I have perceived them as “novels”. I have read neither as eBooks or iBooks (or yBooks, etc.).

Schrödinger’s Cat blew me away back in ’82, so I returned to the science fiction section of the bookstore and bought Illuminatus! I remember I brought at least one volume with me on a trip to New York in August. I remember the thrill when I read a reference to Washington Square Park right after walking through that very park. I had no awareness of synchronicity back in those days.

Well, I proceeded to read all the Wilson I could, and I started turning my friends on to Wilson. (I didn’t develop an awareness of Bob Shea until 1986 when I read Shike which blew me and my friends away, and we wondered whether we liked Bob Shea’s writing even more that Bob Wilson’s.) Today I find myself thinking about my experience of Masks of the Illuminati and with that of two of my friends’ experience of reading that book and three of its main characters, Albert Einstein, Aleister Crowley, and James Joyce. I read mostly science fiction as a teen, and I had taken some physics in college, so when I read Masks I had some background in Einstein’s thought, but I knew next to nothing about Crowley and Joyce. When my friend novelist Paul Chuey read Masks he had a background knowledge of Crowley but knew little of Einstein or Joyce. When his future wife conductor Kathleen Kelly read the book, she had just read Ulysses but knew little of Einstein or Crowley. All three of us enjoyed the book, but we experienced very different novels.

Well, I have remedied my ignorance of Joyce and Crowley haltingly over the decades. I remember Paul and I talked about reading Crowley and we shared the experience that we couldn’t make much sense of a lot of what Uncle Al wrote but that we would find passages that seemed to make a lot of sense and that made us laugh. Well in the fall of 1985 I took a semester of Hebrew and leaned the Hebrew alphabet, and that sure helped me gain a foothold in Crowley’s works. In 1986 I bought The Book of Thoth deck and book and memorized the Tree of Life, and that sure helped me understand Crowley’s writings.

In the late 80’s I also became obsessed with basketball, and a friend of mine’s cousin worked for a radio station and got us great seats for Phoenix Suns games. In 1990 we saw the Suns play the Portland Trailblazers, and Clyde Drexler dazzled me. (Synchronicity: my friend Rob Robinson has observed that Ornette Colemen looks like Clyde Drexler. I have Ornette playing right now, and both Paul and Kathy love Ornette’s music.) At one point I saw Drexler dunk and the “DREXLER 22” on his jersey jumped out at me. I had recently read Tim Leary enthusing about Eric Drexler’s writings about nanotechnology, and thinking of the 22 letters in the Hebrew alphabet I invented Nanokaballah. Nanokabbalah consisted of 22 weeks of study, one for each letter of the Hebrew alphabet. Each day I would read through the appropriate row in Crowley’s 777. 777 uses the Kabbalah as a filing system, attempting to associate a wide variety of mystical systems. It has ten rows for the ten Sephiroth and 24 rows for the 22 letters of the Hebrew alphabet. Two of the letters do double duty in Crowley’s system, heavily influenced by the Golden Dawn system. During week one I read through row 11 for aleph, during week two I read through row 12 for beth, etc. I found this experience illuminating, and I repeated it later spending 23 days on each letter.

In The Game of Life by Leary and Wilson they divide the eight circuits of the brain into three aspects, making twenty-four brains which they then correlate with the 22 tarot trumps and 22 Hebrew letters. They decided to add two brains which did not have corresponding trumps or letters, so I added two more appendices to fit with the Leary/Wilson system.

Well, I finished reading Illuminatus! Fortunately, it has not yet finished with us.
on July 14, 2015

Thanks, Fuzzbuddy. I look forward to the rest of this week's posts on Illuminatus!

Dec 20, 2012John rated it 3 of 5 stars
Bizarre New Age/Paranormal/Illuminanti pot-boiler. I read this as a teenager and found it hugely entertaining, partly because I've never read anything like it before or since. You might want to give it a chance..
flagLike · see review

The text above is a review of Stuart Gordon's Smile on the Void.
I read Illuminatus! some time later than this book. I found this 'other Illuminati' novel in a camp in Labrador.
Titles let books get around. Mumbo Jumbo. Gravity's Rainbow.
This would be a cool book for RAW-knowledgable people to read I suppose? I thought it was really funny.
Did RAW read it, I wonder?
Nanokabalabasketballah,
thanks Eric

Eric, great piece! I like seeing how you research kabbalah. The Washington Square Park sync must have felt spooky at the time, I imagine. I love it when things like that happen. At one point Crowley lived on one of the streets beside the park. He did a lot of painting there.

Thanks for the book suggestion, Ben. Small synch, I see the main character was born in Warsaw. I just returned from Warsaw yesterday.

Thanks, Oz. I didn't know that about Crowley and Washington Square Park.