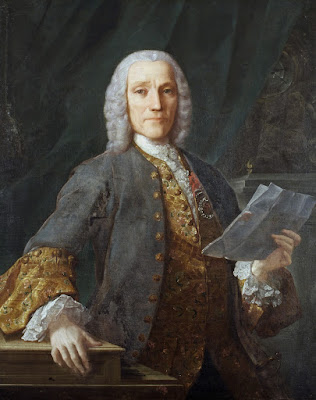 Robert Anton Wilson, in Cosmic Trigger Volume 2: Down to Earth, pithily explained his reasons for wanting to escape the planet and live in a space colony (in the "The Call of the Wild" chapter):

If you are curious about RAW's musical reference, he is referring to Domenico Scarlatti (1685-1757), an Italian composer mainly remembered now for his hundreds of keyboard sonatas. These were not multi-movement sonatas in the Mozart or Beethoven sense, but one-movement, short pieces for the keyboard, nowadays sometimes performed on the harpsichord and sometimes on the piano.

If you want to sample Scarlatti, one low-cost option is to purchase, for 99 cents, the "Big Baroque Box" offered by the Bach Guild. It has more than 14 hours of music, and includes an entire album of Scarlatti recorded on harpsichord by Kenneth Cooper, with a lot of other Baroque music thrown in. The Bach Guild makes a habit of releasing very cheap MP3 compilations; I like the "Big Beethoven Box."

Bob makes great use of Scarlatti in _The Earth Will Shake_. I love how Horowitz plays Scarlatti's music.

I have the same problem listening to scarlatti stoned as I do 80% of western classical too many damn notes!

Give me Rimsky, ravel, and Debussy.

But then I am but a mere uncouth romantic thug!

Funny, I read that chapter literally 15 minutes ago.