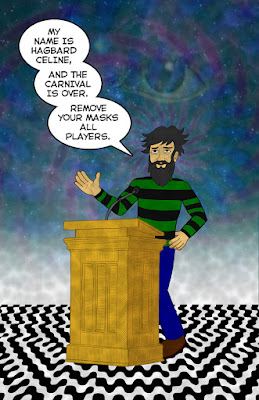 
[J. Christian Greer is a Ph.D. candidate at the Center for History of Hermetic Philosophy and Related Currents (HHP) at the University of Amsterdam. A collection of his papers and talks show that he has discussed Robert Anton Wilson, Timothy Leary, Carole M. Cusack's book on invented religions and Hakim Bey, among other topics. Recently he was awarded a Short-Term Research Fellowship at the New York Public Library, which resulted in his "Timothy Leary as Illuminatus!" article posted in September 2014. As you can see from his piece below, his academic career should produce plenty of interesting scholarship for years to come. -- The Management.] 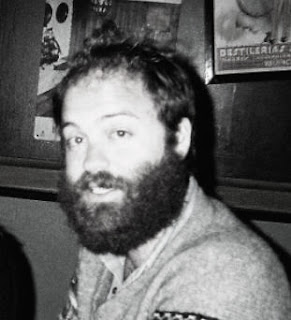 Reading the Illuminatus! trilogy feels like being dropped into an echo chamber that features multiple voices, which on more than one occasion speak at the same time. The most miraculous thing is that the voices harmonize so readily. Describing the trilogy as an "anarcho-occultist romp" or a "labyrinthine tale of Tantrick Reicheanism" (as I have done in classroom settings) only serves to obscure the full complexity of the layered investment of the authors. On one level, I like to try to read the book as the product of a distinct context, to wit, late-1960/ early-1970s radicalism in Chicago. Under this label, a network of intersecting intellectual currents can be traced. The most salient include anarchist anti-authoritarianism, ceremonial initiation, magick, psychedelic consciousness, Reicheanism, General Semantics, the Tarot, and conspiracy. A heady mix indeed!

I have attempted to paint a more accurate picture of the way in which the aforementioned intellectual currents intersect, but always find myself falling down rabbit holes that lead to halls of mirrors that extend ad infinitum. That said, I believe I have identified some of the main thematic pathways that run through the text. I would venture to say that they include: (1) an investment in esotericism that is mobilized to critique the materialist bias within anarchism/libertarianism; (2) conspiracy theory that is employed as a means to destabilize institutional history. In their effort to change the reader on a spiritual level (or, at least on the level of their spiritual identity), they subvert one of the most significant bases upon which identity is created: the past. By challenging the hegemonic influence of official history, Shea and Wilson attempted to renegotiate the construction of American identity. The last (primary) pathway to run through the trilogy is an extension of the first and second. It concerns the revolution that was unfolding all around them; in fact, one cannot hope to understand the trilogy if one is not steeped in the spectrum of late-1960s revolutionary thought. This “pathway” concerns the way in which (3) the militant’s phantasy of violent revolution, which fascinated so many within the protest groups of the 1960s, is rendered obsolete when confronted with the nondual nature of reality (see point 1) and the fact that only spiritual paradigm shifts (see point 2) can facilitate a true revolution. I take the narrative episodes focusing on Atlantis and the founding fathers as illustrations of successful revolutions, and point (3) in particular. Shea and Wilson seem to argue that you cannot expect change to occur if the revolutionaries are still mired in the same 'Yang'/militaristic mentality of those they oppressed. It is only with a Ying revolution (that is, radical consciousness change) that actual utopian change will occur.

On a deeper level, though, the book seems to be a dedicated attempt to make a serious (but not sober) contribution to the “secret teachings of the ages” viz. esotericism. It offers an expansive account of the way in which Discordianism offered a means by which readers could access higher knowledge (through sex magick initiation combined with psychedelics) and “occult” power (such as telepathy, gnostic communication, and transcendental orgasms) which, when used by enough people, would create the possibility for experimental utopian communities. The Leif Erikson serves as the model for this plan. Needless to say, the application of this knowledge (which, would be little more than the conversion to Discordianism) by thousands of people would be enough to bring down all world governments.

In a different dimension, the Illuminatus! trilogy was published upon its completion in 1971. Featuring all of its original, unexpunged chapters fully intact, the book gained wide distribution across the US and then the world. The trilogy revitalized the rainbow coalition of revolutionary groups dedicated to contesting the status quo at the time. However, under its influence, they shifted their focus from challenging the government and its lackeys, to overthrowing consensus reality in toto. Unable to withstand the full brunt of Operation Mindfuck (which has reached such epic proportions that Acapulco gold, Alamut Black, and acid were used as means of putting all the weirdness into perspective), the U.S. government fell and a de-centralized network of 'bolos' blossomed within the fertile soil of its decaying corpse. Within fifteen years, an exponential growth in intelligence makes space migration and life extension realities...

On a personal note, I have greatly enjoyed the reading group for the very plain reason that it provided me with the opportunity to interact with a small community of experts on the text. Clearly, the trilogy is a monument of erudition, and through  the contribution of all the commentators, and the dedication of Tom, I feel as though we have laid a solid foundation for the future study of the text.  While the preceding comments are all in my dissertation (hopefully available next summer!), I am fairly certain that they will not be as appreciated, or even understood, as they are in this forum. It has been an honor and a pleasure to read alongside you all, and, as always, it is my hope that these comments will serve not as a “final word” on the text, but as a means of deepening our discussion of this wonderful trilogy.
on July 18, 2015

Nice write-up! Good point you raise to take into account the milieu Illuminatus! came out of.

Great piece Christian. I especially enjoyed your take on the different dimension of 1971. I hope to read your dissertation when its done. :)

Thanks for this. It's great to read something of Bob from the academic world.