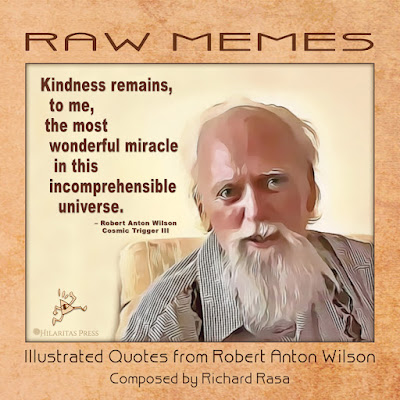 1. I've been reading RAW Memes, the book of Robert Anton Wilson quotes put together and illustrated by Rasa, a few pages at a time. I assume I'll have more to say about it when I finish, but I have a few points I can make now. I notice that the book functions as a kind of "RAW's Greatest Hits," as naturally for his memes and quotes, Rasa emphasizes places where RAW is presenting his main ideas in a pithy manner. It also seems at times as a kind of RAW "self-help book," as many of the quotes seem inspirational. Finally, the book reflects Wilson's broad range of interests, as anyone trying to put together a similar book could do one that was quite different. So far, much of the political stuff Rasa selects has a leftist tone; I imagine if I did such a book, there would be many quotes about Beethoven, civil liberties and quantum mechanics. With that said, Rasa casts a wide net, and  I think just about every RAW fan would enjoy Rasa's selections.

2. Rob Pugh has put up a list of what he read during 2022. Given that we have some shared interests, I thought it was interesting I had so little overlap with him; we've both read The Probability Broach by L. Neil Smith, but that's it. As Kim Stanley Robinson remarked when I interviewed him years ago, the culture is really vast. I also wonder if there are commonalities between the "self help" books Rob reads and the magick books other RAW fans read.

3. I always look at the monthly deals for Kindle books on Amazon; for what it's worth, two of the science fiction novels on sale this month for a cheap price are, in my opinion, two of the best novels of the past ten years: Too Like the Lightning by Ada Palmer, $3.99, and Luna: New Moon by Ian McDonald, $2.99. (De gustibus, but I think Apuleius Charlton will back me up on these two titles).  Often, when an ebook goes on sale, the sale price is available across platforms; I checked, and you can get them as Nook ebooks for the same price at the Barnes and Noble website.  Should Hilaritas Press experiment sometime with this sort of sale for a a classic RAW title?

i think this past year, what with various stresses, i retreated to a lot of fiction. mostly of the suspense/thriller/action type i absorbed from my dad's reading habits. reading as a cope. also, it just felt as if there was much less time this past year. should probably stay off twitter :D

i do think, at least, the good "self help" & personal development books i've read tend to have a commonality with some of RAW's work. (or maybe i'm just wired/reality-tunneled to see it that way.)

a lot of the good/useful psychological hacks i pick up from them share, if not a universal "truth," a lot of useful overlaps. i think, in particular, NLP (obviously) and CBT share useful traits. not to mention the parts of books i've read and/or am working through, that i haven't finished.

regardless, thanks for the shout out. that dopamine hit plus this AM's coffee have helped set me right with the world :D

Where I posted this article online, a lot of folk are commenting on RAW being more left of center than right, so the leftist tone seems appropriate. I did put in a number of quotes closer to the end of the book where his non-Euclidean side comes through, along with a bit of quantum physics. Ultimately, I think the issues RAW championed, are more defined as going forward rather than going left or right... neophilia instead of neophobia. However, when I examine most of the issues I think important, it is usually people on the left who also support those issues. That doesn't make them "left-wing" issues. Nixon created the Environmental Protection Agency back in a time when conservatives actually wanted to conserve the earth's resources, and not just exploit them. That Overton window tilts right these days.

If I had to try to characterize RAW's politics, with all of their changes and contradictions, I would characterize him as a left of center libertarian. In the end, as Rasa notes, a political take is not the only way to look at RAW.

I am curious, Rasa, what the impression has been for people who bought the book as an ebook. Do the illustrations come through OK using a Kindle or Nook app on a phone or tablet, or do they seem to wish they had a paper book?

i can't speak to rasa's book specifically, but i'm always disappointed with illustrations/images/pictures in both the kindle and kindle app. even when well done and structured for them - comics, specifically - they're at best just okay. i always prefer paper for any heavily illustrated book.

I do heartily endorse Too Like the Lightning (which led me to my marriage and changed how I look at the world) and New Moon (sexy Moon murderers).

Hey Tom, we haven't heard from anyone who has the ebook. We are getting kudos from folks who bought the paperback. I suppose the quality of the ebook graphics would depend on the resolution of the device's screen. It's kinda small for a phone screen, but the memes all look great on my iPad Mini. They should look equally good on most readers. The graphics are all in a wide format (1000px wide at 72dpi), appropriate for most reader's screens.