About those space colonies, etc. 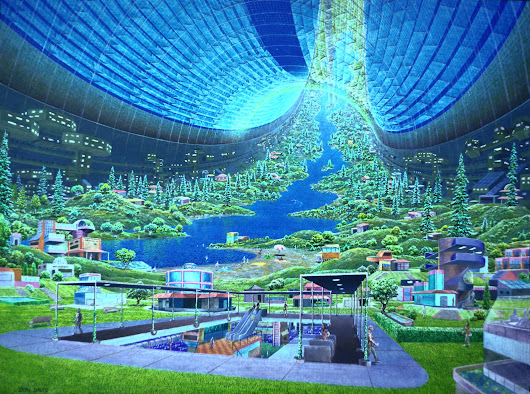 The Stanford Torus, a proposed space habitat. Artwork from the Space Studies Institute, which was founded by Gerard O'Neill. (Creative Commons art).

Tomorrow, the Natural Law reading group resumes, and we'll talk about Robert Anton Wilson's words as he's interviewed in 1987, in the "Dreams Without End" chapter. For a moment here, I want to touch on Sy Safransky's introduction.

Safransky writes, about a RAW lecture, "I almost walked out during his recent talk in Chapel Hill. He seemed arrogant, quick to make fun of people. He also seemed too adoring of such futuristic ideas as personal immortality (literal immortality through conquering death) and mass migration to outer space (millions of 'colonists' leaving the planet to live in high-tech bubble cities orbiting Earth.")

I can't address the arrogance Safransky complains about. As for the element of SMI2LE -- space migration,intelligence increase and life extension -- it's obviously easy to mock RAW's timetables. I'm writing these words from a suburb of Cleveland, Ohio, not from a space colony.

Still, all of the SMI2LE elements seem to be coming to pass. Advances in artificial intelligence are becoming too obvious to ignore. It's becoming easier and cheaper to get into space thanks to companies such as SpaceX.

And work is continuing on life extension. Here's a report from Semafor:

"Two research teams reversed some signs of aging in mice. Scientists at a biotech firm modestly extended elderly mice’s lifespan, while a Harvard team caused mice to age artificially, and then reversed some effects, Science reported. Aging seems to be linked to epigenetics, the process that tells certain genes to switch on in certain cells, so that they can specialize as liver cells or blood cells and so on. The researchers used gene therapy to partially revert the mice’s cells to stem cells, “resetting” their epigenetic clock. It’s very early days, but offers further hope that anti-aging therapies for humans might one day be possible."

I saw RAW speak in the area of a dozen times and never found him arrogant, in fact I found his presentations humorous, highly informative, warm and refreshing when compared to other lecturers on “New Age” themes. But maybe I’m arrogant myself so am blind to it. Speaking of which, maybe the we’d progress faster in SMILE if we changed the stupidity of spending billions on more efficient ways to kill or each, or millions of dollars getting power hungry cretins elected.