More on the 'Periodic Table of Energy' 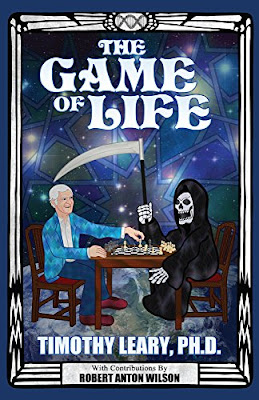 Bobby Campbell's cover for the third edition of the New Falcon third edition of Timothy Leary's The Game of Life, which has contributions by Robert Anton Wilson. Confusingly, Amazon has another edition from a different publisher.

In a recent post, I described The Periodic Table of Energy as a "lost" book that is coauthored by Timothy Leary and Robert Anton Wilson. The manuscript was offered for auction in 2012; I don't know who bought it.

Just for added confusion, the book sometimes is listed as The Periodic Table of Evolution. It remains something of a mystery how the books it with Leary's and Wilson's bibliography, although in discussion on Facebook, Prop Anon said that he believes The Game of Life, another Leary-Wilson collaboration, has chunks of Periodical Table inserted into it.

I got two comments in my original post. Lvx15 wrote, "Sounds like the book they released together called The Game of Life." An unidentified commenting person wrote, "A listing in Exo Psychology shows "Periodic Table of Evolution", separate book from "The Game of Life."

When I did a posting at the Robert Anton Wilson Legacy group on Facebook which linked to my Periodica Table post, Donald Peter Dulchinos posted a screen shot showing the book list from Exo Psychology and other people joined the discussion. You can read the whole back and forth, but here is one of the comments from Prop: "I looked through the Leary Archives at NYPL during the writing of my book Chapel Perilous: The Life and Thought Crimes of RAW. I was under the impression that I saw Leary's manuscript for the PTOE when researching the files. I saw Leary's typed words with RAW's notes on all over the page. RAW helped Leary edit the book. Now there is a chance that it was not PTOE that I saw but The Game of Life. However, I believe the Game of Life has whole sections from PTOE inserted into it. As far as who bought the PTOE manuscript, I do not know. If they were Kool they would put the PTOE manuscript in a proper Library."

If Prop is correct, there could be a situation analogous to The Starseed Signals by Robert Anton Wilson. Starseed remained unpublished during RAW's lifetime and was brought out by Hilaritas; sections of Starseed later were included in the first Cosmic Trigger book.

I have The Game of Life on my Kindle, but I haven't gotten around to reading it yet.

The Periodic Table of Energy or Evolution whichever, certainly appears an early iteration of The Game of Life The latter title begins with discussions on the Periodic Table of the Elements then uses that template to discuss evolutionary stages in humans. It would greatly surprise me if anything substantial came out of one of the former titles that didn't appear in The Game of Life.

New Falcon had a questionable practice of listing ... and selling books that one of their authors simply had an idea to write. I purchased The Temple of Solomon the King by Crowley and Fuller, a book that would include all those articles, serialized in The Equinox of that title, detailing Crowley's magick development. All the writing had been done they just had to make it into a book. After 8 months I asked and received my money back. The book never got made. You can't trust what New Falcon listed as upcoming titles as actually existing.

Check out the 2nd edition; 3rd edition game of life is not in the same format.

I loved Game of Life. It really helped prepare me for Prometheus Rising.

Hi all, FYI response to Oz, the book listing i posted was in the Eco-Psychology book original edition from Starseed/Peace Press, which was basically friends of Leary, so it was at least a set of titles Leary "intended" to write and publish. Both PTOE and something called the Eight Calibre Brain were listed. subsequent to my FB posting, i did a search of phrases from the auction announcement page samples, and found one complete sentence that was in the original Game of Life. So only enough to say some of that PTOE manuscript ended up in Game of Life. But not enough to keep me from hoping... As Prop said, would have been cool if auction winner eventually donated to a public library/archive.