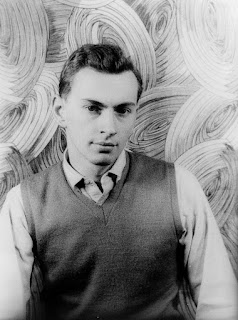 Gore Vidal in 1948 (public domain photo). Vidal once argued against laws banning pedophilia. Such views are no longer considered acceptable, Jesse Walker argues in a new article for Reason magazine.

It seems to me that an important element in standing up for civil liberties is the ability to stay calm and analytical when the latest moral panic is sweeping the country. Robert Anton Wilson spoke out for decades about the biggest enduring moral panic in the U.S., which he called "the war on some drugs," and in Chaos and Beyond (due republication soon from Hilaritas Press) he wrote about the 1980s moral panic about alleged Satanic activity in preschools.

Jesse Walker has a major new article, "A Modern History of 'Groomer' Politics," in the latest issue of Reason magazine, and the piece is now online. Jesse's thesis is captured in the subhead, "The social changes that paved the way for gay and trans acceptance have made pedophile acceptance less likely, not more." And when you take the time to read it, you'll also learn about important changes in the history of heterosexual behavior, and what is considered acceptable between a male and female.

I hope the article gets the attention it deserves; Jesse also ought to be thinking about turning it into a book.