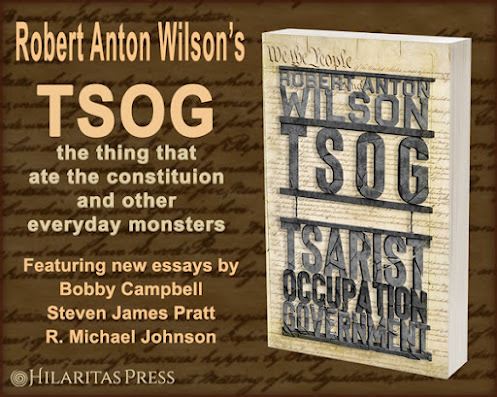 As Rasa says in the announcement, the new edition has another great cover from Amoeba.

Hilaritas Press has announced the release of its new edition of one of Robert Anton Wilson's last books. The announcement is for the release of TSOG: The Thing That Ate The Constitution and other everyday monsters.

Hilaritas often seeks to add value by obtaining new pieces from modern writers, and this time around there are offerings from Bobby Campbell, Steve Pratt and Michael Johnson. Here's Rasa in the announcement:

"We are always looking for some commentary to include in these new RAW editions. We were lucky to get a new forward from Bobby Campbell, a new afterword from Steven James Pratt ('Fly' for those who know him), and as a special addition, there is a long essay included from RAW expert, R. Michael Johnson.

"Michael's essay is particularly interesting. This book ends with an intriguing mystery, if you will. RAW reserved the last chapter for a description of a book he intended to write, but never did. It was to be called, The Tale of the Tribe. No one really knows what RAW intended to write specifically, but we do have an outline. Michael's essay kinda astounded us as it began as a rumination on RAW's idea, but launched into a treatise that easily could be seen as a mirror reflection of one chapter in RAW's proposed title – an in-depth look at one member of the 'tribe.'

"All three new essays are a treat:

More here.
The book has illustrations by Linda Joyce Franks, who also did the cover for the New Falcon edition; the new cover is another arresting effort by  amoeba. (See his Tweet).

The next book on the Hilaritas list is The Walls Came Tumbling Down and I would expect an announcement pretty soon, although I don't have a date. Reality Is What You Can Get Away With and Chaos and Beyond also are listed as coming soon, and a team of editors is hard at work on the recently-announced, not-yet-titled RAW book about Aleister Crowley.

I have an archive of announcements from Hilaritas Press at the top right of this website,  under Official News; if you look, you can see if you've missed any recent news.

Amazon #1 in “Anarchism”. Dunno who picks the labels at Amazon, but I’m pleased to see it.

I don’t recall whether, in the 60s or 70s, RAW ever discussed Spoonerite/Rothbardian scholarship around the Constitution being a victory for establishment elites. A victory over the more radical, decentralized Articles of Confederation. I seem to recall a quip somewhere, maybe in Tsog, that “being pro-Constitution these days manages to be radical.” In other words, we’ve devolved so far into tyranny that what was once pro-establishment is now as anti as we get.

In any event, politics is lowbrow and low-information, so best not to pay too close attention. In paying attention, “we only encourage the bastards.” TSOG is a great manual to deprogram oneself from American Empire prop. Can’t wait to reread.