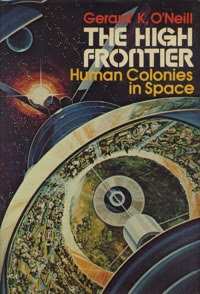 Prop Anon has been very active in posting Robert Anton Wilson pieces and he has now posted two more at his Chapel Perilous website.

"Truth Comes on Swift Wings" is a piece on magick based on Egyptian hieroglyphs, which Prop notes was published both in the Berkeley Barb and Samuel Konkin's magazine, New Libertarian. Prop posts the Barb version; I ran a PDF from the Konkin publication back in 2012. As usual, Prop offers commentary: "This article is interesting too because it appears proto-chaos magic to me. Wilson relaying a magic ritual that involves watching television and utilizing one's imagination or Krassner's suggestion that everybody flush their toilets during Nixon's inauguration suggests that Magical rituals are more improvisational than the Golden Dawn ever conceived!"

The second piece is "UN Habitat Conference: Doom-Sayers, Yea-Sayers Converge," also from the Barb, criticizes environmentalism based on limits to growth and argues for Gerard O'Neill style space colonies. Perhaps when O'Neill proposed them, they were too expensive; have ventures like SpaceX made them a more realistic choice?

The U.S. Labor Party, which appears in the second article, was a LaRouche group.