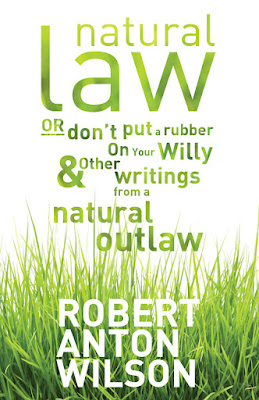 Some good news from Hilaritas Press: A Kindle ebook edition of Natural Law Or Don't Put A Rubber On Your Willy And Other Writings From A Natural Outlaw edited by Chad Nelson finally has become available, after months of effort from Rasa and Christina Pearson. You can now buy a copy for $9.99, cheaper than the $23 for the paperback. Not too late to buy a copy and join the reading group!

"I’m so glad we got this online. Last night I went to sleep, pissed off that they once again refused, and I was already preparing a response in my head when I woke up. Imagine my delight when I saw their email!" Rasa says.

If you are late to the epic struggle, Amazon balked for about a year to authorize a Kindle while selling copies of the paperback, claiming copyright problems. The whole Natural Law project has been something of a struggle; the Nook ebook had technical problems that have now been fixed. I've thought that the book was really good since I read it and I've done my best to get it out there. So OK, now y'all can buy it and turn it into a surprise bestseller.

Among Amazon's arguments was that the original Natural Law essay was "freely available online," as if the legitimate owners of the copyright should be punished because of piracy.

Rasa's latest letter to Amazon which finally convinced the company to let the Kindle edition go forward is a thing of beauty, and with Rasa's permission, I'm reprinting it here:

We really have a hard time understanding your logic here. Our new book features the title essay as one of thirteen Robert Anton Wilson essays, so this book of ours is completely different from the original Breakout Press edition which featured only one essay. The title essay is less than half the book.

The title essay has been illegally reproduced online. That does not mean it is in the public domain. That means The Robert Anton Wilson Trust does not have the resources to police the entire internet.

You are incorrect about the documents submitted. The contract between The Robert Anton Wilson Trust and Hilaritas Press most certainly contains the title of the book. That is the sole purpose of the document, to grant rights to publish this particular book to Hilaritas Press.

Since we published this book over a year ago, Nook, Kobo and other online ebook outlets have been selling the ebook. The paperback has been distributed by Ingram to online outlets and brick and mortar stores all over the world. No one has complained about any copyright issue.

It further seems counterintuitive to deny any profits you may make in selling this book when other ebook sellers are taking your sales.

We have demonstrated that this book is legally owned by The Robert Anton Wilson Trust and the Trust has granted the right to publish to the Trust’s publishing firm, Hilaritas Press.

Pleases address these points we have made, or more simply, just release this new book.

Thank you for your consideration.

Email ThisBlogThis!Share to TwitterShare to FacebookShare to Pinterest
Labels: Natural Law Or Don’t Put A Rubber On Your Willy And Other Writings From A Natural Outlaw, Rasa

This is great to hear! We appreciate all the hard work you are doing!