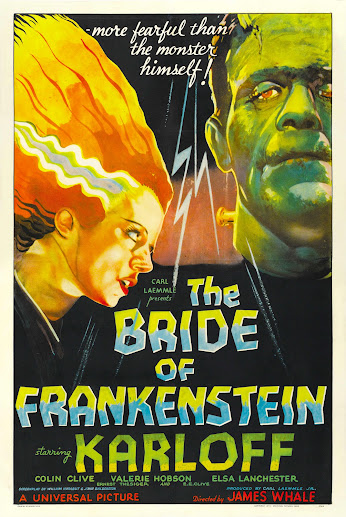 For Halloween, I'm trying to watch some of the movies on Jesse Walker's top ten best  horror movies list, and last night I watched Bride of Frankenstein (it's available free on Tubi). I particularly enjoyed the sets, which in many scenes looked like a particularly well designed haunted house. I am too ignorant to have heard of any of the cast except for Boris Karloff, but I admired how one of the actresses, Elsa Lanchester, played dual roles as Mary Shelley and as the title character. I was curious about the actress who played Henry Frankenstein's wife, Valerie Hobson, so I looked her up and discovered that one of her husbands was John Profumo, famous for a 1963 British sex scandal.

Robert Anton Wilson's abortive sequel to Illuminatus! had the working title of Bride of Illuminatus. (If you are curious, the small bit he completed -- it doesn't blow me away -- is reprinted in Beyond Chaos and Beyond, the interesting compilation of RAW writings edited and published by D. Scott Apel.) I'm assuming RAW's title is a reference to the movie Jesse recommended; please correct me if I'm wrong.

Bonus: Jesse's review of the movie:

"A young scientist named Frankenstein feels torn between a conventional marriage and a same-sex liason with his mentor, an old queen named Pretorius. The latter persuades the protagonist to reproduce with him through unnatural means. Upon succeeding, Pretorius proclaims himself "the bride of Frankenstein." Careless viewers assume he's referring to the couple's creation." (Source).

I love The Bride of Frankenstein for the inclusion of the Villa Diodati sequence, the heightened camp that James Whale put in and the development of the theme of isolation.

One of my fav RAW experiences was back in the early MLA days, which were also the early DVD-thru-the-mail Netflix days, and I'd been watching and then writing about old movies.

And the conceit was that I would try to fabricate connective tissue between each movie I watched, trying to weave them into a singular narrative. In a "small enough map / thick enough pencil" type of way.

I was just writing this stuff to myself in an out of the way corner of the MLA public forums, but early on RAW popped up and started "yes and-ing" my commentary. I still remember my response:

“HOLY CANNOLIS MY BOOKS ARE READING ME!!!!!"

That's why I asked to come over and sit in on his weekly movie night, bc we were already talking about movies.

Clint Eastwood's character in High Plains Drifter is a Pookha, he told me, for example!
(Harvey in his avenging spirit form instead of as a trickster god)

One of my fav unanswerable RAW questions is if he chose "Son of Frankenstein" (the sequel to Bride) because he knew I was coming over, or if it just was what it was.

Just after the Maybe Day MLA reunion we were lamenting the lost last RAW class "Neurologic" which never happened, but actually for me the bigger loss was the proposed class that lost out, alas, in a not even close vote to Neurologic.

RAW Movies! Basically a movie club. We were just gonna watch and talk about movies w/ RAW.
It would have been so fun! And I knew he was in no shape to try to run a class on Neurologic too, but getting stoned as fuck and watching "Horse Feathers" or something?
It would have been brilliant. Anyway!

Final dot to connect: I finally found the proper way to tell the full "Son of Frankenstein" story, which will appear as an afterward in the new edition of RAW's screenplay "The Walls Came Tumbling Down" coming soon from Hilaritas Press :)))

Thank you Bobby for your great comment!
I once publicly lamented around here how film-wise, RAW seemed kinda stuck on Orson Welles. If he indeed loved Welles' work, this comment of mine mostly spoke of my ignorance. So I started instead to gather in a list every film that gets a mention in his writings. Here is the list so far, far from complete (I also plan on moving it soon to Letterboxd): https://www.imdb.com/list/ls505472939/

Did you ever get anywhere in your attempt to "weave them into a singular narrative"?

That film list is a great idea and an awesome resource!

Here's some fresh fuel for the fire:

I saved some, but not all, of the original thread, so it's a bit incomplete, but basically:

The first 3 movies I watched and connected were:

4. Harvey - The Pooka = Horus as Hoor-Par-Krat
5. High Plains Drifter - Man with no Name = Horus as Ra-Hoor-Khuit

And I can't find my notes! but I think the gist of it was a kind of self-aware meta-modernism, where once intractable opposites were now seen as false dichotomies: FACT/FICTION, LIFE/DEATH, etc.

I then watched a bunch of Frank Capra and Marx Bros movies and it all synthesized into a kind of hyper-surreal indefatigable HOPE :)))

RAW connected Citizen Kane with Finnegans Wake in a pretty ingenious way, of course! But that's a whole other can of worms...

Wow, Spookah, that list of 69 movies might make one think RAW was primarily a movie critic! Thanks for compiling that. It seems fitting to note RAW's love of film if only because he credits King Kong and the Wizard of Oz with opening his ideas to his early thoughts on multiple realities and model agnosticism.

Around 2009 I became obsessed with David Thomson's writing about film. I highly recommend his books.

Next month Sight and Sound Magazine has their best films of all time pols (critics' poll and directors' poll). They do it every ten years. They started doing it in 1952. I love the fact that they have the results up on their various websites. You can see all of the ballots for the 2002 and 2012 polls. I look forward to seeing this year's results.