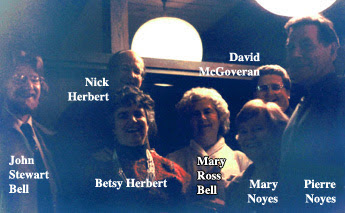 The recent Nobel Prize in physics given to three physicists who helped prove Bell's theorem, which I wrote about in a recent blog post,  has inspired a new blog post from my favorite "hippie physicist," Nick Herbert (as in How the Hippies Saved Physics, the David Kaiser book about the physicists Robert Anton Wilson wrote about in Cosmic Trigger and elsewhere.)

In his post, "The Reality Prize," Herbert provides background on the new Nobel Prize from his own perspective; one of the three winners, John Clauser, had lectured at Esalen (like Herbert) and Herbert apparently knew him quite well.

Herbert's explanation of Bell's theorem and his essay has some mind-blowing paragraphs. After describing what happens with a pair of entangled photons, one observed by "Alice" and one by "Bob," Herbert writes:

So what more does this magnificently useful but utterly mysterious wavefunction say about the Alice and Bob experiment?

First: Quantum theory says that whatever happens is entirely independent of the distance between Alice and Bob. If they are in the same room, as in most practical physics experiments, the results will be exactly the same as if they were ten thousand light years apart, separated by vast interstellar distances.

Second: While unobserved, the wavefunction does not assign any polarization attribute to either Alice's or Bob's photon, but when Alice measures her photon, using a clock direction of her choice, her photon instantly acquires a definite value, AND SO DOES BOB'S PHOTON even though Alice and Bob might be separated by galactic distance. This instantaneous connection, if it is real and not just confined to the theory, violates all the norms of modern physics.

Alice's apparently instant action on Bob's photon has gotta be faster than light (goodbye Einstein) but that's only part of the trouble. This interaction, unlike any we are familiar with in physics, is not diminished by distance. Furthermore, this Alice-Bob intimacy is not transmitted by any field we know of-- it just happens. Alice's action on Bob's photon is, in brief, unmitigated, unmediated and immediate.

Physicists label such alleged behavior, as “non-local”, a tame word that conceals their deep intellectual loathing for an unholy abomination, for a deeply unnatural act.

Reading the whole thing is a worthwhile use of your time. Herbert is the author of Quantum Reality, a popular science book that discusses quantum theory.

Herbert corresponded with John Stewart Bell and actually met Bell in 1988 at a dinner party: "I recall very few details of that dinner in '88, except that for me it felt like sitting in an extra chair at Jesus's Last Supper. In John Bell's presence, I felt that close to holiness."