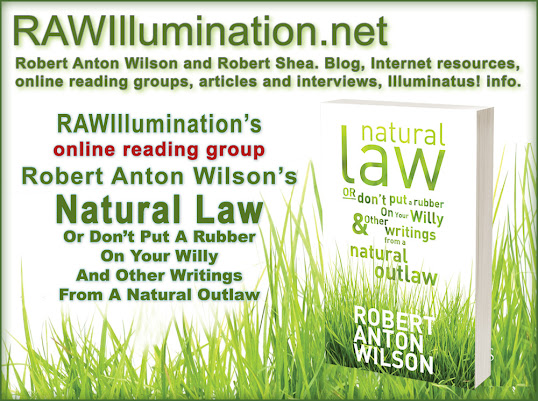 I am hoping that some of you will be persuaded to join the reading group for Natural Law Or Don't Put A Rubber on Your Willy And Other Writings From A Natural Outlaw from Hilaritas Press that I announced a schedule for on Monday.  (Starts Nov. 28).

Although the title essay was published in a journal called New Libertarian and consists of an argument Wilson made with several prominent libertarians, I would argue that it's not a "libertarian book" or a "libertarian RAW book." As Chad Nelson explains in this interview, the book's theme is really about model agnosticism. (To be clear, a "RAW libertarian book" would be fine with me, some other time. But that doesn't really describe Natural Law, in my opinion, or Chad's).

Still not convinced? Here are a couple of "celebrity endorsements" from the world of RAW fandom.

Brian Dean, who writes the RAW Semantics blog, is decidedly not a libertarian, as far as I can tell from reading his Twitter account.

Here is his review of Natural Law on Twitter: " I grok RAW best thru his *BOOKS*, & I found NL absolutely essential (& fun). Take a weekend & read it properly."

The cover artist, Scott McPherson, also is not a libertarian. Brian Dean and I both liked the cover, which as Rasa points out, references a RAW quote,  "Every perception is a gamble, in which we see part, not all, (to see all requires omniscience) and 'fill in' or project a convincing hologram out of minimal clues. We all intuitively know the obvious and correct answer to the Zen koan, 'Who is the Master who makes the grass green?' "

When we discussed the quote on Twitter, Scott said that he liked the book so much he made a departure from his previous covers: "Aye, this one is aimed at the general public and wellness mob ;)  it's meant to look like an appealing  book you would see in the Sunday papers.... it's a trojan horse design ;)  meant to suck you in.....

Chad endorses the book, too, of course, but some people might question whether he is totally objective, as he edited the book. Rasa likes the book, too!

Email ThisBlogThis!Share to TwitterShare to FacebookShare to Pinterest
Labels: @amoebadesign, Chad Nelson, Natural Law Or Don’t Put A Rubber On Your Willy And Other Writings From A Natural Outlaw, RAW Semantics

Thanks again for putting this together, Tom! I sent copies of NL to a few other "celebrity" RAW fans, so perhaps now might be a good time for me to follow up and see if they enjoyed it, and whether they might like to participate in the reading group.

I look forward to the reading group.

Looking forward to reading more on this, and I appreciate this post! The libertarian designation seems an interesting one, as I've always considered many of my views to be fundamentally libertarian (although Tom's right in surmising I don't really identify as libertarian - or any other political group, come to think of it).

I've seen all kinds of meanings imputed to the label 'libertarian'. In the UK, the Boris Johnson section of the Conservative Party likes to think of itself as libertarian - but the Home Secretary they've just appointed wants to make cannabis a Class A drug like cocaine, and wants to have the legal power to electronically tag anybody who has been at a protest in the past that caused even a slight bit of disruption (eg noise). Which seems like the opposite of libertarian to me. Maybe the various meanings of libertarian could be something to be discussed in the Natural Law reading group? RAW's version vs some other versions, etc?