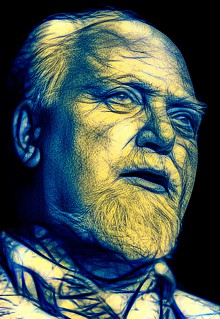 Apparently inspired by a recent comment thread for a post at this blog, Brian Dean has written two blog posts to sort out Robert Anton Wilson's opposition to sexist and racist prejudice of all kinds and to study how RAW also spoke out against "political correctness." Brian argues, correctly I think, that RAW was opposed to hate trips and to language that denied the individuality of people and lumped them into groups targeted to be hated. Or as RAW put it, "The argument between Left and Right now consists only of debates about which groups we should hate."

What is interesting is that Brian took two bites at the (golden) apple. First he penned "Provoc #2 -- Bride of Provoking."   Then after getting a bit of feedback, he reworked it, including with a new title and art, as "Wilson on PC and Feminism."  As a bonus, if you read Brian's posts, you get to see some of his experiments in reworking photos of RAW (I've posted one above).

I don't know how deep in the weeds I want to get on this stuff at the moment, but as someone who dedicates a fair amount of time & effort signal boosting and publicly supporting RAW's ideas: I don't think this represents his strongest work and I think it aged poorly.

Complicit is outdated. Now the word for people who are not activist enough is privileged (which of course was defined better in Illuminatus!)

(Note: at time of writing, only Bobby & Supergee's comments are present to me). I agree with Bobby, at least in terms of RAW's framing, some of which (eg 1995 CT3 era, on "rad fem") appears to have "aged badly" almost by definition (to the extent of some of the most knowledgable and supportive of RAW's fans'/readers' evaluations, and to the extent of some wider, more general readings that have been expressed).

These issues will get debated, no doubt. And I prefer to see it in a context of knowledge/appreciation for RAW's work (what we have here) than via context-free Facebook memes, etc. My own leaning towards accentuating what I find deeply and lastingly useful and important in RAW's writings extends to these issues, because I find the underlying logic and arguments consistent with the rest of RAW's work, even if his own use of group labels sometimes seems off the mark (by definition?) over the passage of time and shifting of contexts.

Beyond that, I don't really see any flawed or objectionable reasoning in these writings. But I'm very willing to hear otherwise (here or at my blog comments section). As with the political specifics RAW sometimes discussed, I find myself both agreeing and disagreeing with various aspects (based on local context/labelling/allegiance etc) but recognising the shape/structure of his logic that remains valid and useful to me in a sort of "meta-" way.

I'm pretty sure I've written about this on the blog, but I couldn't find the post when I searched.

In a letter to me, around 1995, RAW wrote that feminism (along with Marxism) has "a special link to Old-New Testament cult of guilt, shame, submission..." He didn't elaborate, unfortunately, although it was in the context of discussing media paranoia over violence and crime. (Also some "radical feminists" that he criticised were involved, at least "promotionally", in the Satanic Panic scares in the USA.)

I marvel over the fact that this was from the Cosmic Trigger III period, and my own anonymous, mediocre effort had earned some praise from him while he wrote these biting, take-no-prisoners passages in CT3 and elsewhere. I read some of those passages from CT3 again today. He hints and also explicitly states that the inflammatory nature of some serves an intentional purpose (see the test at the end of the chapter which contains the "straight pride" anecdote, 'Pride and Prejudice'), for example.

I think Brian does a great job extracting a workable general principal from RAW's hot button writings, and I think we have a similar hindsight as 20/20 vantage point on some of the specifics, but I may have a slightly more provocative take on RAW's provocative takes :)))

At some point I'll have to unpack it just to clear my head of it, but it feels a bit like trying to untangle a bowl of spaghetti. Messy, complicated, and ultimately probably futile!