What to recommend to the RAW newbie? 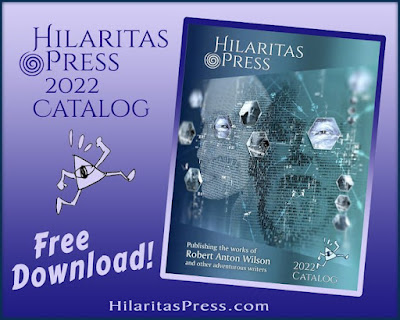 On Twitter, RAW Semantics: "Although relatively few, I see a steady flow of people *new* to #RobertAntonWilson, curiously inquiring. Can I gently suggest you read his BOOKS first? Here's a catalog of them (from @TheRAWTrust). I predict you'll be very glad you took this suggestion! https://hilaritaspress.com/catalog/."

I asked, "Do they ask you what to try first? If so, what do you tell them?"

Brian replied, "Generally Prometheus Rising, as that was the first RAW non-fiction book I read (and it made a big impression)."

My own tentative suggestion is Masks of the Illuminati, although I wonder if The Widow's Son might be better for someone who prefers fiction. (I'm pretty sure Apuleius Charlton told me he reads it again every year, and Mike Gathers described it in a podcast as the first RAW book he finished, if I understood him correctly. The Widow's Son is a favorite of Bobby Campbell).  I also think Cosmic Trigger 2 might be a good introduction, and I think it's an underrated RAW book.

Email ThisBlogThis!Share to TwitterShare to FacebookShare to Pinterest
Labels: Cosmic Trigger 2, Masks of the Illuminati, Prometheus Rising, The Widow's Son

I know a lot of people start with Cosmic Trigger or Illuminatus!

Great topic! Obviously depends on where they’re coming from. But it’s hard to beat Quantum Psych. General Semsntics and the nature of reality are fun, accessible, and broadly applicable topics, with high probability for brain change.

Probably Cosmic Trigger or Prometheus Rising, I would say.
I suspect that one might enjoy RAW fiction books more when they already are sort of familiar with at least some of his ideas. On this regard, an amazing RAW book not by RAW would be John Higgs' book on the KLF, which provides great context to people new to these ideas.

Cosmic Trigger tops my list partly because of the personal nature of the writing. It makes a great introduction to RAW the person along with the ideas and areas of research that interested him. For fiction, I'd say Masks of the Illuminati.