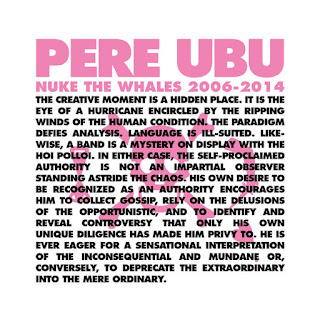 From a review by Sean Kitching at The Quietus of Nuke the Whales,  a vinyl box set reissue by rock band Pere Ubu: "The title here appears in Robert Anton Wilson’s 1979 novel, Schrödinger's Cat, as an invention of the character, Markoff Chaney, and also in an episode of The Simpsons from a decade later. It was also supposedly a slogan utilised by Cleveland graffiti artists, likely predating RAW’s usage."

Pere Ubu originally hailed from Cleveland, and the Cleveland connection seems to be the most likely explanation for the title. I sent a link of the review to Robert Wheeler, a longtime synthesizer player for Pere Ubu who has left the band, and asked for comment.

"I know Nuke the Whales as graffiti in the flats in CLE, I think it was RAT (Regional Art Terrorists). It may be a reference to blowing up the whale carcass in Oregon," Wheeler told me.

There are some synchronicities here that amuse me. Nick Helsey-Larsen sent me the review, without knowing that I know a guy who was in the band for 27 years. And David Thomas, the leader of the band, lives in Brighton, also the home of John Higgs.

Here is Sean Kitching's listing of ten essential Pere Ubu tracks, including the one with my friend Mr. Wheeler "on particularly powerful form."

I love Pere Ubu; just listened to their song Golden Surf, it appeared on Paula's playlist for her radio show yesterday.

I heard a variation of this grafitti: "Nuke the gay whales for Jesus," attempting to get even more politically incorrect, I guess.