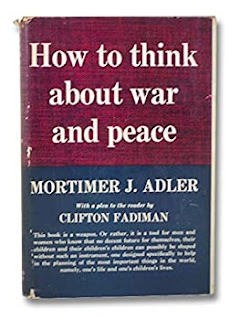 The latest rediscovery of Martin Wagner is "How to Think About War and Peace," self published by Robert Anton Wilson in 1962 in the journal Way Out.

It is written as a book review for a now probably largely forgotten book, How to Think About War and Peace by Mortimer Adler, published in 1944 when World War II was still raging.

The book apparently argues in favor of world government as an antidote to war, and RAW pushes back, arguing as an anarchist in favor of "the voluntary association of small human-size communities in which the local rules are made locally by those who actually do the work. Such communities might occasionally fall into conflict, as did the communes of the Middle Ages, but they will not be able to throw the rest of mankind into an uproar along with themselves, and a man in Peru need never be afraid, under that anarchistic system, that a disagreement between a man in Moscow and a man in Washington might result in the incineration of Lima."