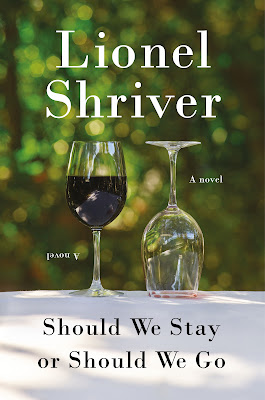 [Here is the latest announcement for the Prometheus Award; I serve as one of the judges selecting the nominees. The connection to this blog is that the Prometheus Hall of Fame Award is, so far as I know, the only literary award the Illuminatus! trilogy ever received. -- The Management.]

Works by Gallagher, Ishiguro, McCarthy and Shriver selected as finalists

The Best Novel winner will receive an engraved plaque with a one-ounce gold coin. An online Prometheus awards ceremony is planned for August at a time and event to be announced.

In brief, here are the five Best Novel finalists: Between Home and Ruin and Seize What’s Held Dear, by Karl K. Gallagher (Kelt Haven Press); Klara and the Sun, by Kazuo Ishiguro (Faber and Faber); Rich Man’s Sky, by Wil McCarthy (Baen Books); and Should We Stay Or Should We Go by Lionel Shriver (Harper Collins).

Here are capsule descriptions of the Best Novel finalists (listed in alphabetical order by author), explaining how they fit the distinctive focus of the Prometheus Awards:

• Between Home and Ruin, by Karl K. Gallagher  (Kelt Haven Press) – A direct sequel to his 2021 Best Novel finalist Storm Between the Stars, this second novel in Gallagher’s Fall of the Censor series continues his dramatization of a prolonged interstellar war between a long-isolated group of colonized solar systems and a much larger human polity. The Censorate is an authoritarian human empire that maintains its Orwellian power by memory-holing the past and destroying older books, art and records to subjugate planetary populations. After rediscovering a path to other solar systems, the Fierans are fighting against Censorate invasion to preserve their freedom, independence and culture. This sequel, which drives home its themes with a cross-cultural love story about a man and woman separated by war, also powerfully highlights governmental atrocities of war, including mass murder and destruction of civilian cities – a focus especially timely in 2022 as brutal war rages anew in Eastern Europe.

• Seize What’s Held Dear, by Karl K. Gallagher  (Kelt Haven Press) – In his third Fall of the Censor novel, a direct sequel to Between Home and Ruin, Gallagher explores further the quest to preserve knowledge, commerce, civility and civilization itself despite war, tyranny and the suppression of culture, history and memory. The novel also illuminates the practical effectiveness of private contractual courts and arbitration systems in maintaining law and justice without government, even amidst challenging and ongoing disagreements, occasional crimes and contractual disputes in a messy and recognizably human society. Gallagher compellingly dramatizes a variety of space battles and military strategies while contrasting the belligerents’ strategies, operations and tactics: The Fierans have the military and community of a messy but mostly free society, while the Censorate is an information-crippled totalitarian empire of bureaucratic yes-men wherein facing facts, reporting bad news, questioning authority and telling the truth can be fatal.

• Klara and the Sun, by Kazuo Ishiguro (Faber and Faber) – Set in a near future when commercial development of AI robots make them affordable for affluent-family servants and companions, this poignant fable by the Japanese-British Nobel-Prize-winner subtly explores existential questions about self-awareness, intelligence, agency, servitude, foundations of liberty, and personhood. Told through the limited, fallible eyes of its gentle title character, this story explores her childlike thirst to comprehend the world, conceiving a solar-energy-related proto-religion and embarking on a secretive quest to save her ailing girl charge. Just as few people glimpse Klara’s awareness while virtually all remain blind to her potential personhood in a culture increasingly antagonistic to AIs, Ishiguro intentionally leaves readers with few clues about Klara’s true nature. This hauntingly ambiguous meta-libertarian tragedy evokes the ancient tragedy of widespread slavery, once commonly accepted and only recently abolished via the universalizing liberal/libertarian commitment to dignity, self-ownership and freedom for all.

• Rich Man’s Sky, by Wil McCarthy (Baen Books) – This imaginative sf adventure explores human expansion throughout the solar system, propelled by four billionaires. McCarthy weaves a suspenseful mosaic of epic conflicts and maneuvers between governments and markets as a team of elite military women infiltrate and aim to violently undercut the billionaires’ visionary space projects before they change the world for good or ill.  Some of the “Four Horseman” are revealed to be admirable, and some decidedly not, but McCarthy makes all four real and human as they spearhead game-changing private-enterprise projects that governments aren’t capable or willing to do. Today, many vilify the super-rich while State aggression, assassination, spying, sabotage and other abuses “throwing muscle around” are often excused, minimized, hidden or ignored. Overall, this Heinlein-esque tale of State-threatened market innovations persuasively counters stereotypes from what free-market economist Ludwig von Mises dubbed “the anti-capitalist mentality.”

• Should We Stay or Should We Go, by Lionel Shriver (HarperCollins) – Explicitly affirming the libertarian self-ownership principle that “Our lives belong to us... and it’s up to us how we choose to end them,” this kaleidoscopic novel explores 12 alternate-universe scenarios. An aging, comfortably affluent British married couple makes end-of-life decisions with unpredictable consequences. Shriver, with her characteristic wit and maverick insights, shows how aging and life/death decisions are difficult enough but become much worse through government paternalism, welfare-state bureaucracies, socialized health care, forced medication, involuntary hospitalization, virtual imprisonment, anti-suicide laws, massive debt/inflation and/or other government dysfunctions. Variously evoking dystopian specters (Orwell, Burgess’ A Clockwork Orange, Kesey’s One Flew Over the Cuckoo’s Nest) or exploring the downsides of seemingly utopian advances (super-long lives, cryogenics), the thought-provoking, fast-paced novel satirically but seriously offers timely cautionary tales as the average life expectancy of the world population rises into the 70s and beyond.

All LFS members have the right to nominate eligible works for the Prometheus Awards. The Prometheus Award finalists for Best Novel are selected by a 12-person judging committee. Following the selection of finalists, all LFS upper-level members (Benefactors, Sponsors and Full Members) have the right to read and vote on the Best Novel finalist slate to choose the annual winner.

Membership in the Libertarian Futurist Society is open to any science fiction fan interested in how fiction can promote an appreciation of the value of liberty.

The Prometheus Award, sponsored by the Libertarian Futurist Society (LFS), was established and first presented in 1979, making it one of the most enduring awards after the Nebula and Hugo awards, and one of the oldest fan-based awards currently given in sf. The Prometheus Hall of Fame category for Best Classic Fiction, launched in 1983, is presented annually with the Best Novel category.

For more than four decades, the Prometheus Awards have recognized outstanding works of science fiction and fantasy that dramatize the perennial conflict between Liberty and Power, favor voluntary cooperation over institutionalized coercion, expose the abuses and excesses of coercive government, critique or satirize authoritarian ideas, or champion individual rights and freedoms as the ethically proper and only practical foundation for peace, prosperity, progress, justice, mutual respect, and civilization itself.

For a full list of past Prometheus Award winners in all categories, visit www.lfs.org. For reviews and commentary on these and other works of interest to the LFS, visit the Prometheus blog via our website link.