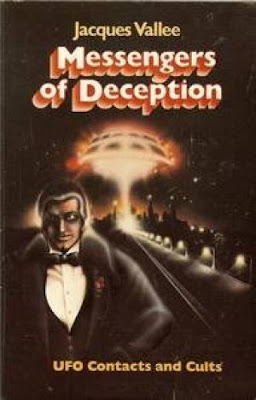 As a reader, when I go over Jacques Vallee’s warning about the UFO phenomenon “creating new religions, cultural and political concepts” my mind immediately goes towards such obvious freak cults such as Scientology, Raelism and even the quaintly batshit Unarius Academy “of Science.” Yet, that might not be the best place to begin contemplating the gravity of Vallee’s warning.

Belief in the UFO phenomenon is something that many people seem to think is a prerequisite for taking it seriously, but it is inarguable that the UFO phenomenon has helped to shape our mass perception of the world around us. It should be remembered that along with “I Want To Believe,” another tagline of The X-Files was “Trust No One.” If one accepts the proposition that the whimsical conspiratorial thinking of the Nineties gave way to the deluge of paranoia fostered by the Internet in the Bush era onwards, this helps to explain a certain mode of thought prominent on today: paranoia and mistrust.

The belief that the government is “obviously” hiding knowledge about UFOs leads to an easier acceptance that the government is “obviously” hiding other information from the masses. In the same way that New Agers can become rabid anti-vaxxers, the belief that the government was covering up something at Roswell can lead to a belief in some grand Illuminati-adrenochrome- harvesting-cabal. Thus we see that far from warning about the nefarious efforts of The Church of Scientology to manipulate the law to serve their own means, Vallee’s alarm about new political concepts are far flung and often-as-not end up being about something completely different than flying saucers.

Don’t get me wrong, I believe that thinking about the UFO phenomenon is a worthwhile pastime to exercise the mind and the boundaries of belief, but without the constant reflection and doubt prescribed by Robert Anton Wilson, can lead to stark raving mad ideas. Instead of revealing that there is no governor anywhere and the entirety of the human race is making up reality piecemeal as we traverse through time, conspiratorial dalliance can give way to the false idea that someone, somewhere is in control. The contradicting stories that surround the history of the UFO (now UAP, a term that means exactly the same as the now unfashionable, unscientific moniker) phenomenon should indicate that there isn’t some solid counter-narrative to the rational conception of the universe but that all narratives are kinda tatty and lacking.

One mode of thought will lead to the liberating notion that reality is a construct that can be toyed with and improved upon by the individual, the other leads to the opposite idea where we have been duped and press ganged into some unholy prison. Of course, I should note that there is a lot of nuance between these two extremes but I think it is fair enough to set them up as the two different ends of our dichotomy. Personally, I disagree with the idea that we “should never ascribe to malice what can be blamed on incompetence” as there is no reason to believe that continual incompetence isn’t born of obstinacy and ill-will. Inattention and sloppy handlings of matters can easily be malicious; if you don’t believe me, try working with adolescents, or revisit the Flint Water Crisis.

One of the great tasks of the conspiracist is not to end up in an armed showdown with the government, or spend one’s life in intellectual squalor, surrounded by the rats and mites of the darker corners of culture. As I’ve pointed out in many posts before, Wilson’s constant reminders of the dubiousness of our own perspectives is a vital tool for preventing such an outcome. It should be noted that the positive use of conspiratorial thinking, as exemplified by the fifth exercize for this chapter, is a strong preventive measure against ending one’s days wearing a tinfoil hat, armed to teeth, awaiting the New World Order to start sending troops into your home to steal your valuable research.

Great post, thank-you for the warning and elaboration thereof. Balance seems key in any exploration of unknown events. For instance, obviously the government withholds information from the public, we find degrees of classified material for who gets allowed to receive certain information. The government under Obama kept secret the domestic surveillance they undertook, Snowden exposed this practice. This shouldn't provide license for imagining other things the government may hide without a shred of evidence, or construct a scenario and find certainty in it based on circumstantial evidence.

Balanced skepticism, model agnosticism, awareness of how belief systems filter and shape our perceptions, applying the method of science, all provide conceptual tools and guardrails for not going off the deep end. I also consider it wise to stay in contact with someone smarter or more experienced in this work.

Like Spookah mentioned last week, providence or fate also kindly provide an ailment for me to practice healing techniques. About 6 weeks ago I began experiencing pain in my right shoulder and arm often accompanied with tingling sensations. After 4 weeks when it wouldn't go away through the physical exercises and attention I placed on the problem, and in fact continued getting worse, I saw a physical therapist/chiropractor and got it diagnosed as bursitis. I continue to see the therapist and chiropractor twice a week and do both physical exercises (ones they give me) and healing practices inspired by material in Prometheus Rising.

A few synchs - I had to drive an hour to the sports therapy place to get my initial bursitis diagnosis. The local branch didn't have any openings for 10 days. When I returned, a nomadic, hippie-type character occupied our driveway in his car, It seemed he worked as a freelance delivery person. It looked like he had all his belongings in the back of his station wagon, and he smelled pleasantly of patchouli oil. A friendly type, he asked how my morning went, I told him of the arm issue. After hearing my complaint, he whipped out a handheld machine I later identified as a percussion massage device. It seemed like he had it right beside him, ready for use. I hadn't ever seen one and immediately thought about the possibility of a scam or that he had a sideline selling these things. As if reading my mind, he assured me he didn't sell them, told me the brand and that I could get it on Amazon. Next time I saw such a device occurred at the 3rd visit to the chiropractor when he applied it to my arm - the first time any of the manipulations made a lasting difference. Last week I mixed the song Broken Wing for one of my regular clients.

In the other RAW book blog, I posted about a modified rendition of John Lennon's assassination appearing in Schrodinger's Cat and how that may parallel current events. The day after, as I began driving into town, my mix tape (actually a cd) starting up in the middle of the Lennon song Mind Games. The first lyric I heard: "digging the future out of the now," one I hadn't paid much attention to previously. It struck me that perhaps RAW "dug out" or received impressions of future events, maybe without realizing, of the now he wrote in.

I remain agnostic about UFO's; we can find a great deal of unexplained phenomena. I suspect much non-human alien intelligence on Earth though favor the explanation they come from alternate dimensions rather than outer space. The first Men In Black film has practical information for the exploring occultist whether it has any factual basis or not. I consider the covid virus an alien intelligence.

My Creatures of Prometheus cd arrived from Greece a week or so ago. This is the composition Beethoven wrote to score a ballet. In my non-expert opinion, this music seems simpler, less complex, than what I usually hear from Beethoven. It has more space, sparser arrangements than typical, and sounds very dramatic as you'd expect. Obviously a soundtrack to a visual piece, yet still very beautiful; quite evocative of the subject matter.

Also have been listening to a cd of two pieces of Water Musick one by Handel, the other by Telemann in honor of the fiery activity going on in Ukraine, and to encourage more moisture in drought-stricken California. A note on the cd booklet says: "In these works, water is the element that unites the great Baroque musicians Handel and Telemann, who showed great respect for each other (and also showed an interest in gardening ...)." A great recording of the performance by the Zefiro Baroque Orchestra. Coincidentally, the weather snows and rains this week. Perhaps that subconsciously affected my musical selection right before the weather turned?

Schrodinger's Cat appears, by far, the most musical of RAW's non-fiction, maybe of all his writings with the exception of any articles featuring music as the sole subject matter.

I feel like the motto "trust no one" can also be understood in a way that is not necessarily paranoid. Simply a call for model agnosticism, as well as following no gurus nor governors. Trust only your own senses and experiences, and then still keep a healthy skepticism.

Oz Fritz, I like your comment on "digging the future out of the now". One could see the future as a yet-untouched quantum field of potentialities and probabilities. Then it would be the task of the Wonderist to use hir shovel of Optimism to try and dig out the most exciting and fun of possible futures, a tentative magical act in itself. And definitely part of what seems to have been RAW's life mission.
The San Fransisco Diggers of lore seem to me to have been quite the shoveling Wonderists. https://www.diggers.org/overview.htm

A recent New Thinking Allowed discussion deals with the Fatima prophecies in ways that expand this PR chapter 13 tremendously. Guest James Tunney connects the apparitions to everything from Lenin and PK Dick to Jacques Vallee, James Joyce, and in a thoughts provoking turn of events the current situation in Ukraine. A fascinating talk that I highly recommend.
https://www.youtube.com/watch?v=TyO_exlJwP8