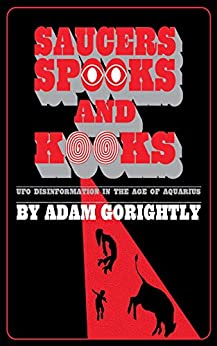 OK, so I didn't get to Adam Gorightly's UFO book, Saucers, Spooks and Kooks, as quickly as I meant to. It's still his latest book after it came out about a year ago, and it's a really good book that would be of particular interest to Robert Anton Wilson fans; RAW is discussed in the book's long concluding chapter, "Afterward: Adventures in Chapel Perilous."

Most of you will know Adam for his excellent Historia Discordia website that is fueled by his stewardship of the Discordian Archive, papers from the Discordian movement. The website has excellent articles and recently made available a Kerry Thornley poem, "Illuminati Lady," which Illuminatus! recommended reading but which has largely been unavailable until now.  That archive also produced a "lost" Robert Anton Wilson book, The Starseed Signals, published by Hilaritas Press. Adam has written three books which illuminate the Discordian background of Illuminatus!: Historia Discordia: The Origins of the Discordian Society; Caught in the Crossfire: Kerry Thornley, Lee Oswald and the Garrison Investigation, and The Prankster and the Conspiracy: The Story of Kerry Thornley and How He Met Oswald and Inspired the Counterculture.

Adam, however, has written at least 11 books, illustrating his wide range as a self-described "crackpot historian," and his latest, Saucers, Spooks and Kooks, chronicles the last several decades of the flying saucer/UFO movement, largely focusing on New Mexico, the site of the alleged flying saucer crash in Roswell, New Mexico, in 1947 and of other doings involving secret alien bases, covered-up shootouts between ET's and people, the release of stacks of allegedly secret, allegedly authentic government documents about the U.S. relationship with ETs. The book is put out by the publishing arm of the Daily Grail website.

Adam takes a decidedly skeptical view toward many/most of these supposed doings and his witty discussion of many of the most outlandish statements is one of the highlights of the book, as when he discusses the claim of the unfortunate Paul Bennewitz that ETs were beaming mind control beams to keep him and others from getting the truth out. Bennewitz had to resort to screening devices such as aluminum foil to deal with the "extraterrestrial electronic harassment."

Adam shows how many of the claims of UFO enthusiasts -- a flying saucer crash in Roswell, an underground ET base in Dulce, New Mexico, etc. -- emerge over and over again through the years, in many cases because of a possible disinformation effort by U.S. spy agencies. (There is considerable overlap between the UFO groups and military veterans, and Adam argues that Russian spies would target the movement, not so much as to learn about UFOs but to gain access to U.S. military secrets; that's what the U.S. intelligence community was trying to thwart.)

One particular point deserves mention. In 2017 and in 2020, the New York Times published articles about resurfaced Air Force videos of UFOs which helped focus a lot of interest in UFOs by normally sober-minded people.

Saucers, Spooks and Kooks essentially is a two part book. The bulk of it is Adam's UFO movement chronicles, but a long afterward, "Adventures in Chapel Perilous," discusses Adam's own feelings on the movement, on conspiracy theories in general, and how Adam got interested in such topics. Adam also explains Robert Anton Wilson's theories on reality tunnels and how RAW's outlook can be applied to such discussions.

I can recommend Adam's book as a good read that will bring you up to speed on flying saucer lore and will show  you how it relates to the writings of RAW.

Adam's book is available from all of the usual bookstores as a paperback and ebook; I bought my Kindle at the reasonable price of $7.