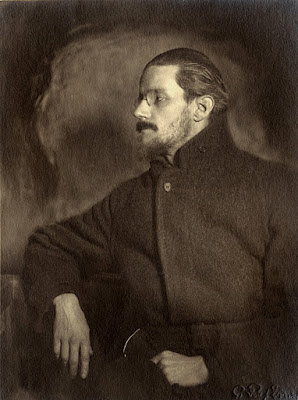 James Joyce in Zurich around 1918, the approximate time of the setting of RAW's Masks of the Illuminati, which features Joyce as a character. (Public domain photo by Conrad Ruf.)

Mike Gathers, host on the ongoing Hilaritas Press podcast, reports that the topic of the podcast to be released on April 23 will be James Joyce. It's a topic I've been waiting for.

Mike explained the first eight podcasts were devoted to concentrating on influences and aspects of Robert Anton Wilson's classic Cosmic Trigger (although admittedly, Buckminster Fuller, last month's topic, and James Joyce don't loom large in Cosmic Trigger, but "those are the subjects we ended up with to round out the series," Mike says)

The podcast series will continue, however, and Mike is working with ideas and getting topics and guest lined up. I'll cover any further announcements and releases of episodes.

All these podcasts have been great so far. I suggest having Phil Farber on RAW and Crowley, if possible.

Thank's for the suggestion, OZ!!!!