The promise of psychedelic therapy 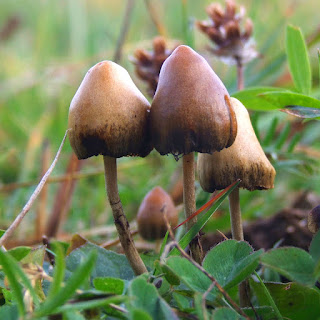 The New York Times has a recent article, "Psilocybin Spurs Brain Activity in Patients With Depression, Small Study Shows" about the very promising results in using the substance for depression treatment. (My link should get you behind the paywall and allow you to read the article.)

Robert Anton Wilson used to argue that Timothy Leary had shown that psychedelics could be used for brain change, specifically for re-imprinting. And interestingly, the article quotes a researcher on making a similar claim for how psilocybin works in treating depression:

Another author of the Nature Medicine article published on Monday, Robin Carhart-Harris, director of the Neuroscape Psychedelics Division at the University of California, San Francisco, said the functional magnetic resonance imaging scans offered intriguing clues about the way depression inhabits the brain. The resulting images, he suggested, might be best compared to an undulating pastoral landscape marked by hills and deep valleys. People with depression, he said, often get stuck in a valley. Although S.S.R.I.s can make them feel better, the drugs do not appear to change the overall landscape of their brain, as it were, suggesting that the drugs do little more than ease the symptoms of their depression.

But the psilocybin treatments, he said, seemed to provide a way out of those metaphorical valleys by inducing what scientists call global increases in brain network integration — essentially touching off activity across parts of the brain that were previously cut off from one another.

“Psilocybin therapy seems to flatten the landscape so you move out of the valley,” Dr. Carhart-Harris said. “It makes you freer to move on.”

'First there is a mountain...'

If we are to keep this metaphor, I'd say that, just like in the song, psychedelics will show you that THERE IS NO MOUNTAIN. Which somehow makes it all the more frustrating if, or when, you later fall back into negative thinking patterns, since you know that it's all in your mind and still, you can't seem to escape the 'valley'. At least this has been my personal experience.

Thank you for sharing this news, Tom. Psychedelic research seems to be one of the very few areas where things are progressing in a positive direction these days.