The Quietus on RAW's 'Schroedinger's Cat' 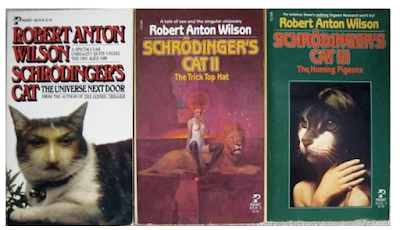 The Quietus runs a good-sized article on RAW, focusing on the Schroedinger's Cat trilogy.

The piece by Sean Kitching, "The Schrödinger’s Cat Trilogy By Robert Anton Wilson At 40," includes a paragraph explaining how Kitching found his way to RAW:

Wilson’s books were extremely important to me when I went through a period of cognitive dissonance myself, during my late teens and early 20s. Having spent much of my school years feeling dissociated from much of the information considered to be of importance by the education curriculum, I finally discovered a sense of connection to the writings of the beats. Kerouac and Burroughs led me, indirectly, to Robert Anton Wilson, who in turn provided a gateway to figures such as Buckminster Fuller, Aleister Crowley, Timothy Leary, Wilhelm Reich, Alan Watts and John Lilly.

Kitching argues that Wilson's prose and techniques can serve as a way to "wake up" from the current consensus reality imposed by social media and political ideologies:

All of these ideas, according to Wilson’s ethos, are intended to be stimulating and useful rather than objectively True, and are offered as a counter-effective remedy against the forces of mass hypnotism that keep the populace asleep and easily controlled. This, in itself, is an idea very much of Wilson’s time, but it is not yet one we have transcended the need for. If anything, in our age of social media and the ubiquitous consequences of so-called ‘Reality TV’, we need such ideas more than ever.