A discussion of the Bavarian Illuminati in the film Noon Blue Apples, aka New World Order. Eris (Lauren Fox) is visiting the Chapel Perilous Bookstore, located on 23rd Street in New York.

Maybe poor Eris never should have visited the Chapel Perilous Bookstore as she began to explore conspiracy theories.

I've been involved in RAW fandom for many years via this blog, so I'm surprised that until Monday, I had never heard of the movie New World Order, originally released in 2002 under the title Noon Blue Apples.

True, it's an independent film, not a Hollywood blockbuster, but it did draw a review in Variety (which hated it), got a few reviews in other places and starred Lauren Fox, who has appeared in a couple of movies I have actually heard of. And it was screened in various film festivals.

Robert Anton Wilson is not mentioned by name, but one shot shows a copy of Cosmic Trigger on the shelf at the Chapel Perilous Bookstore. There are RAW/Illuminatus! references galore. I didn't write all of them down, but there are lots of eyes in pyramids, there's a discussion of the Bavarian Illuminati, the number 23 is referenced, the Sirius Mystery is explained, the John Dillinger Died For You Society is mentioned, there's lots of Holy Blood, Holy Grail stuff, the protagonist is a young woman named "Eris," her pal's name is Howard Phillips, Eris carries around a notebook with a golden apple on the cover ... you get the idea.

The plot concerns a young college student who studies conspiracy theories after running across an occult diary by an occult writer whose name sounds like "Ronald Allen Holt," a near anagram for Robert Anton Wilson, if I heard the name correctly.

I'm no film critic, but I would say that it's not terrible. I enjoyed much of it, wasn't totally sold on the ending. I'm curious what some of y'all will think of it. This reviewer liked it better than the Variety guy.

The writer and director is somebody named Jay Lee. Confusingly, IMDB lists two different "Jay Lees," but I am pretty sure it is this guy. See also this bio.

I watched the movie Monday. (It's available free on the Tubi TV website, you can rent it for a buck from Amazon and it's also available at the various other streaming platforms. It also is free on YouTube.)

The Internet Movie Database website has 11 reviews of the film by viewers, none of whom apparently caught the RAW references or even the references to the bestselling Holy Blood, Holy Grail. 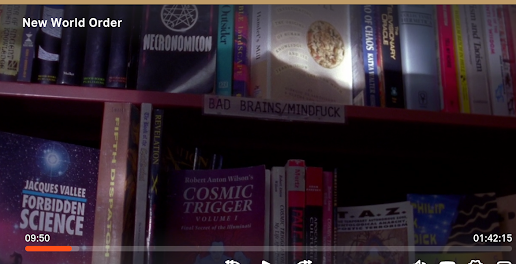 A bookshelf at the Chapel Perilous Bookstore.