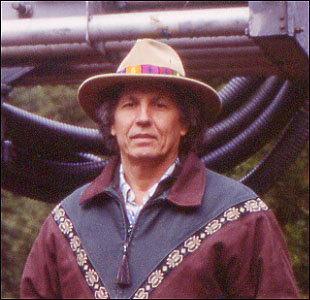 James DeMeo, director of the Orgone Biophysical Research Lab and a scientist heavily influenced by Wilhelm Reich, has died, according to this death notice posted April 5 at the Wilhelm Reich Museum website.  I could not find a conventional obituary that includes the time of death. The last posting on his Twitter account is dated Jan. 23.

My condolences to Jim's family, friends and acquaintances. I knew him in grad school, University of Kansas, and always liked him. He was a dedicated student and worked hard to do his research on cloudbusting by the books. He had an admirable goal of doing real good for all of humanity if the technology could be established.

He chose a hard road to follow, as being at the fringe of the establishment is a hard slog. I lost touch with him after grad school, but occasionally read about him on the internet. As far as I could tell, he stayed true to himself and his goals, not an unmean feat by any standard.
I shed a tear as I sign off. He was a good classmate.

My condolences to James DeMeo's family.
I met James a number of years ago in a conference relating orgonomy. And later read from time to time his books and about his research, I asked questions and always got thorough answers.
I learnt about Dr. James DeMeo's death a few days ago and still shocked to realize that he is no longer in this world. A true wise man. devoted to his way, very thorough, a real scientist, wrote and spoke clearly and in a way that everyone could understand, an expert in his fields of interests. I listened earlier today to his interview on a certain radio on the 2nd of April this year. According to the internet he died the day after. So sorry for this terrible loss. I wish there was a way to write to his family. but as there is no way to do it - I am writing a few words here. James DeMeo is missed in this world.
R.I.P good man

Condolences to James family. I crossed paths with James a few years ago due to my interest in the dynamics of space. I ordered a couple of James books and read them with interest. I realised we had very similar views. I emailed James and was delighted to receive a prompt response and we exchanged a few emails over the following months. There was a warm and kindness that shone through in his emails. I am saddened to hear of his passing and will miss exchanging ideas and thoughts with him.