Review: By the Forces of Gravity 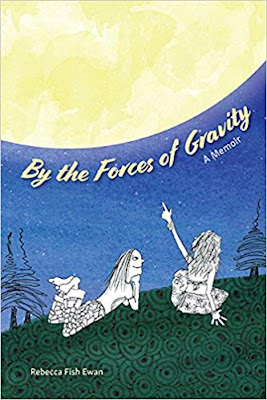 
By The Forces of Gravity – a Memoir,  Rebecca Fish Ewan

Some time back RAWIllumination had a short description of By the Forces of Gravity along with a link to buy it. I waited to see a review of the book on this same site, but none appeared. As we start into 2020 I thought I’d write one myself as it’s a marvelous book and worthy of some good mention here on Illumination.

Gravity covers an intense friendship which occurred between the author Rebecca Fish Ewan and Luna, Robert Anton Wilson’s daughter who many will remember from Cosmic Trigger. I was lent Cosmic Trigger to read many years back in my early twenties. The friend who lent it to me told me not to leaf through any of the last pages. He told me to read it properly from start to finish. As I came towards the end I asked my friend, ‘What is this strange energy which is building up in the book…?’ It was a bad feeling but I couldn’t put my finger on it: I’d never encountered severe grief before. My friend smiled sadly and told me to continue.

Luna Wilson’s life was so short (15) that most of us thought we’d never hear of her again.
Her delightful antics described in Cosmic Trigger were a tiny window into her life. Any other memories were a private affair, only for her family and friends. Then, just recently a part biography of Luna was written and drawn by one of her friends, Rebecca Fish Ewan. The book is a sequential art biography of the author’s deep friendship with Luna told in a very distinct manner. The whole book (all 492 pages) is profusely illustrated with roughly half of the book being text and the other half art.

What makes the book especially strange however is the manner in which the biography is told. Ms Fish Ewan doesn’t just tell of her childhood with Luna, instead she inhabits herself at that age (12 to 15) in order to tell her story. This is not just a new concept in sequential art, it also makes for an unsettling read. The reason for this is that Rebecca is a victim of sexual abuse.

By the time she’s performing oral sex with a dirty tramp in a hippie pad for a bowl of soup, we’re entering into the darker side of hippie culture. None of the other hippies bother to stop the abuse or help her out. They practically walk past her on the floor while the abuse is taking place. If such accounts of her lonely life were to be retold by Ms Fish Ewan from the perspective of an adult, one might expect some moralising, anger or reflection of how to stop such abuse from happening in present times. Instead we are made to face the story of the abuse from the point of view of the hapless child herself. Perhaps most saddest of all is the manner in which the ‘Me Then’ narrator accepts her unhappy emotional void as being normal.

For your average church-going conservative, the lack of moral judgement combined with the
illustrations would likely lead to outrage and disgust against the permissive Sixties and
even against the book itself. However it could be said that sexual abuse and emotional
neglect happen in all cultures in society and not just sub-cultures. We even have a current president who was exposed for making 'jokes' about sexually assaulting women.

So respect to Ms Fish Ewan for bringing some candid honesty to the grim side of the hippie world. If she had turned to adult narration with a moral clipboard the biography wouldn’t have had the same raw impact.

There are plenty of happy memories in Rebecca’s book too. There is a ray of sunshine in the young lady’s life – a gentle friend by the name of Lina Wilson. It is shortly after the previous hellish low that Lina and Rebecca decide to rename themselves in a special private ceremony in which Lina becomes Luna and Rebecca becomes Becky Star Fish: 'soul friends forever'.
Perhaps the most memorable scene in the book:

Later in the book Rebecca sums up the quiet love felt between these two best of friends as they hung out, just being together:

Recognising her increasing vulnerability to abuse, the Wilson family invite Rebecca to stay at their house. But space is tight there (The Wilsons had 4 children) and so she eventually moves on. A school teacher also helps to put her on firmer ground and so she finally becomes grounded in a less aimless life.

In time the girls lose touch with each other, with Rebecca suffering the most. Luna Wilson is not as emotionally needy as Becky Star Fish. After one to two years of barely seeing each other Luna reaches out to Rebecca with a heart warming letter asking to renew their friendship.

In one of the last touching scenes they meet up at last in a clothing store where Luna works – both rather nervous and shy. Luna offers Becky Star Fish a gift; a choice of anything in the store. Rebecca chooses a bright yellow garment. When she leaves the shop clutching her precious parcel close to her chest, we get the impression that both of the young women are floating on cloud nine. But will they be able to renew the intense closeness of their friendship after such a long absence? The answer might just reduce you to tears…

By the Forces of Gravity is (much like Cosmic Trigger) a remarkable book. I hope it becomes more popular in time. It also deserves a larger audience beyond the world of R.A. Wilson’s fans. In stands proud in its own right as a special and moving account of Rebecca Fish Ewan and her intense friendship with Luna Wilson. If you haven’t read it yet I suggest you put it on your reading list for 2020.

Editor's Note: After Iain kindly offered me this review, I asked him to share a little bit about himself, and he obliged: "I first read Illuminatus! in my teens having discovered it in a dark little 2nd hand book shop in Inverness. I'm now in my mid 50s. By the late 1980s I became fascinated by a couple of parts of Prometheus Rising. As a result of this I went on write The Sekhmet Hypothesis, which then became revised and re-titled as The Hare Hypothesis in the early 2000s. I'll re-price it and the companion volume for free this Friday & Saturday in-case you might want a digital copy from Amazon.

"I'm not sure where you live in America - I hope it's not too hot. [Cleveland, Ohio, not terribly hot in the winter -- The Management.] I live in Scotland on the Isle of Mull. I seem to remember commenting on your site somewhere how we used to order several copies of Falcon Press books to share among ourselves here in the UK in the late 1980s. Thank goodness for eBay and Paypal!

"I just listened to the Gabriel Kennedy interview on your site with your friend, a gent called Greg someone [Gregory Arnott, my trusty Widow's Son blogger -- The Management] ...I was worried that a biography of RAW might end up reveling in gossip and the like, but he seems like a respectful man who's been in touch with the family. The Greenfield bio of Leary was (I think) truly awful...I only skipped through it. In contrast Mr Kennedy seems to be sympathetic & genuinely fascinated in his subject."

Thank you so much for this thoughtful review of Rebecca's book. I appreciated how you commented on the storytelling form and perspective, and how that contributed to the book being the book it became. You are spot on! Thank you again for sharing your thoughts on this, and I, too, hope it inspires more people to read this remarkable tale!