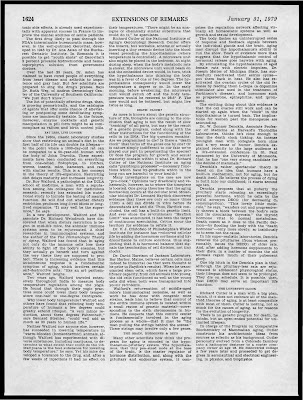 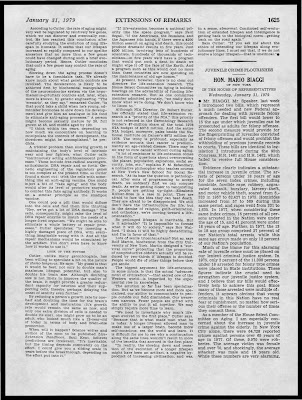 With a fine sense of understatement, Jesse Walker remarks "Here is something unexpected," and  sends along a few pages from the Congressional Record, above, showing that Congressman John P. Hammerschmidt put an article from the October 1978 issue of "Omni" magazine, "Some of Us Will Never Die," into the Congressional Record for Jan. 31, 1979. If it's easier to read, here's the PDF.

Robert Anton Wilson's Cosmic Trigger is named in the text, and the article describes the murder of Wilson's daughter, Luna, and the attempt to preserve her cryonically for future revival, as described in the book.

Rep. Hammerschmidt is not, as you might guess, some hippy-dippy Democrat representing Berkeley, Calif., but was a conservative Republican from Arkansas who stood by Richard Nixon to the bitter end when Nixon was being forced out of office and who favored a law to protect the American flag from desecration. In one of his re-election campaigns, he defeated Bill Clinton.

The "hippy-dippy Democrat" who's represented Berkeley since 1998 is Barbara Lee, whose signature is trying to revise the AUMF - authorized use of military force - so that the President can't continue to just start wars w/o Congressional approval, a Constitutional violation which has stood since 9/11.

Hi Michael, nice to see you pop up in the comments. She was also the only member of Congress to vote against the AUMF after 9/11, a vote that looks better every passing year.

Hi Mike. I hope all goes well. Perhaps the 2020’s will become the Michael Johnson Decade. We made it through the Al Franken Decade thirty years ago.