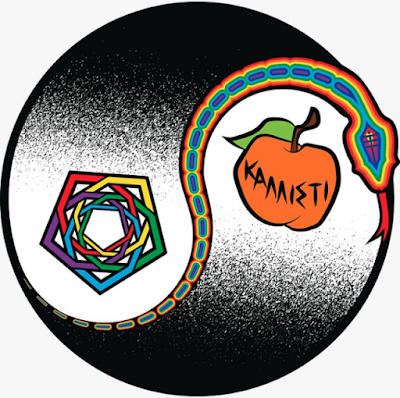 Cat Vincent says (in his latest email newsletter) "The redesign of the Discordian Hodge/Podge is a result of a working the Festival 23 team and I did last year (in an actual Castle Perilous!): With their help, I raised a new god, the rainbow snake which signifies the in-between state where Yin becomes Yang. In 3-aspect Taoism, this threshold state is called Shen.

"The rainbow snake between Hodge and Podge is named, could only be named, Bodge.

Cat also writes about Brexit in the latest newsletter (he doesn't like it). To sign up for his "Thoughts on Fortean journalism, magic, religion, High Weirdness, kink, genre media and the oddness of living in a Yorkshire hippy town" go here (letter archive also available at the link.)

UPDATE ON ART CREDIT: Cat's newsletter said "Art by Peter Fosse" and I copied that in the original version of this post. On Twitter, @Microbial42 said, "Peter Fosse said this wasn't his artwork, but Peter Horneland's, at Robert Anton Wilson Legacy group on Facebook." Cat then said, "I believe Peter F added the Bodge snake to Peter H's original."