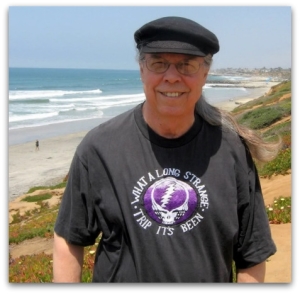 Lorenzo Hagerty from the "Psychedelic Salon."

I've linked to websites, but if you have a decent podcasting app on your phone, you should be able to find these.

The Psychedelic Salon, "RAW's Politics." A recording of Robert Anton Wilson at a 1987 Libertarian gathering. Sound quality is not the best. Very funny much of the time, but mostly what  you have heard before. RAW repeats the joke, "You know how dumb the average guy is? Half of them are dumber than that," so he's apparently not quite clear on the difference between the average and the median.

The Jai Dev Show, "Oz Fritz, the Wizard of Sound." A good introduction to Oz' interest in the Kabbalah and other topics.  I posted about the podcast earlier and finally managed to actually listen to it.

Eric Weinstein's The Portal, "Tyler Cowen - The Revolution Will Not Be Marginalized."  The first part of the podcast discusses the consumer price index and was hard for me to follow, but there's a good discussion of conspiracy theories in which Eric does better than Tyler. Then there's a good music discussion, and it turns out Tyler is very good at talking about the Beatles.
on January 07, 2020

Aren't the mean and the median each a different kind of average?

I think Jesse is right. And besides, that joke doesn’t scan well referring to “the median guy.“