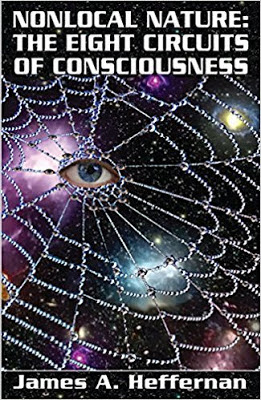 The new book on the Eight Circuit Model, which I noted in this blog post.

(I liked Michael Johnson's comment on my Eight Circuit post the other day and thought it deserved a post of its own. I cut out a couple of sentences referring to me to make it more of a stand-alone piece. See my original post, including the comments, for more. The Management.)

ALL models/maps seem meant to be used, and we are never to believe the map/model IS THE TERRITORY.

The 8 Circuit Model is obviously metaphorical: no neuroimaging machine will detect neural circuits that correlate with, say, a "metaprogramming" circuit in the grey matter.

The entire system grew richer over time and is getting richer in 2017. It serves many functions, but perhaps the most valuable function is the classic intellectual's gambit: invent a system of thought that allows for other thinkers to think in new spaces for further intellectual talk, experimentation, and speculation. Prof. Lakoff would say the 8CB Model was a re-framing of various previous models.*

1.) Another thinker takes up the cudgel and elaborates on it. RAW did this most brilliantly in Prometheus Rising, in my opinion. Intellectuals with stellar synthesizing abilities have a field day in these novel mental spaces/models, even if only to display cleverness and erudition. I think RAW elaborated on Leary AND wowed us with his erudition. Most of Darwin's ideas were already in the air, or written down; his contributions to inchoate prior ideas were so monumental we rightly see him as genius, even though his maps had nothing about genetics in them...

2.) A thinker finds fault with the model in an INTERESTING WAY that suggest a new avenue of approach to some phenomena.

3.) A thinker basically agrees with the model, but strongly emphasizes what were "latent" or lesser ideas in the system, and they build upon the "old" system a new one. Does Jung as Freud's student qualify here? I think so, but others may disagree. Wilhelm Reich basically took Freud at his word and ran with it, and it seems like a "new thing" because Freud was maybe afraid to say it: if we're sexually repressed by social forces/Ego, maybe we need to get rid of the repression and not just accept it, etc...

And how does Crowley fit here? Sorry about the divergence...

I personally find the 8CB Model audacious, and I love to think with it, although I find many flaws. I have difficulties with a systems/process world of "reality" clashing with the implied individualistic aspects of the 8 circuits/systems/dimensions of Mind. Antero Alli's emphasis on systemic interconnectedness with different circuits - which was hinted at by RAW and Leary as far back as 1974, as Gathers has recently noted - functioned to make the Model seem more cybernetic in itself.

Maybe I need to maneuver in new ways. Hell yea I do...

It seems to me the neurogenetic and 8th/atomic are the least well-developed. The 8-ness of the model has seemed to me, at times, a product of shoehorning, and I think it was Bob Campbell who recently reminded me that RAW thought the Model would become extended to newer circuits, which just highlights the open-source-ness of the Model.

(Also: it's audacious but doesn't cover everything, although one could argue it as a sort of prolegomena to a Theory of Everything [TOE]. Just as we don't use a topographic map to find our way to a party in a city unfamiliar to us. Lately I've been wondering if the emotional component of discovery and reflection and speculation in Cosmology and subatomic quantum entanglement is best thought of as 8th circ. territory...)

For Leary more so than RAW (in my current understanding): the "post-terrestrial" circuits 5-8 were in large part a way for his perceived audience ("tribe") to further distance themselves from the "larvals."

* As I noted in this blog post, Leary was working on his model at least as far back as 1963. See "The Seven Tongues of God," delivered as a lecture in 1963, in Leary's The Politics of Ecstasy. Michael also has remarked on this. -- The Management.
on December 10, 2017

What a great discussion of the 8CB model and models in general! Thanks, Michael.

You could argue that Leary and RAW saw the 8CB model as a "Theory of Everything that the model could describe," and between the two of them, they added a lot of description. But it's true that both of them thought the model was just a model and open for any kind of re-evaluation or revision.

Leary seemed to revel in the model's various permutations and connections between psychological imprints, biological systems, genetic codes, Quantum Mechanics, the Periodic Table of Elements, Chakras, Tarot, Astrology, etc.. He did have an "anti-larval" vibe. Reminds me of Ken Wilbur describing his Integral theory, Wilbur said, if I can paraphrase, "yes, we are the elite, but anyone is welcome to join us." Sounds kinda smug, but we do live on a very primitive planet. Probably any understanding of a workable meta-model puts you ahead of most of the pack.

RAW seemed more interested in a practical application of the model in Prometheus Rising, and focused on the psychology, the sociology and the political ramifications – giving exercises at the end of each chapter to help the reader put themselves into the model.

Your "three main ways a Model becomes richer" should be taught in schools.