A naysayer on Leary and Wilson's theories 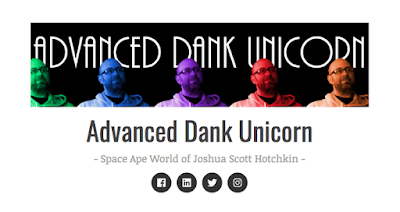 A fellow named Joshua Scott Hotchkin, who has a blog named Advanced Dank Unicorn, recently posted a piece called "Why You Should Be Skeptical of Timothy Leary’s SMI2LE Formula." This is a followup, of sorts, to Hotchkin's other recent piece, "The Eight Circuit Model of Consciousness Is An Egotistical Abstraction," which he claims is "fraught with issues, even as an analogy."

Hotchkin has been using Facebook to propagate his theories, and as you might imagine, it hasn't gone down well with many Leary/Wilson fans. Richard Rasa ventured some criticisms, and found himself blocked by Hotchkin.

It seems to me that the Eight Circuit model remains alive, at least in the sense that people still find it useful, as I've documented on this blog here and here. As for SMI2LE, there are plenty of Silicon Valley libertarian types who are trying to make space migration, intelligent increase, life extension and all of the rest of it a reality, and spending real money to do so. A blog post by a fellow in Iowa doesn't change that.

Rather than address Hotchkin's points, arguably not worth my time, I want to make a general point about models: As RAW would say, you use them insofar as they are useful. To put it in Buddhist terminology (from one of the Pali sutras), a raft is for getting across a river, not constructed to serve as a burden to carry around indefinitely.

As I write this, the disease model for dealing with opioid addiction has become popular in the U.S., because it solves certain problems. It removes the stigma from getting treatment, it allows people to focus on solving the problem rather than discussing the alleged failings of the person with an addiction, etc. No doubt there are points where the disease model might fail, or at least could be debated, but it remains alive because it is useful.

I made no such claim.

If your style of argument is to make up stuff, and put it other people's mouths, why should I take a lot of time to engage with you?

I'm very much with you, Tom: ALL models/maps seem meant to be used, and we are never to believe the map/model IS THE TERRITORY.

The 8 Circuit Model is obviously metaphorical: no neuroimaging machine will detect neural circuits that correlate with, say, a "metaprogramming" circuit in the grey matter.

The entire system grew richer over time and is getting richer in 2017. It serves many functions, but perhaps the most valuable function is the classic intellectual's gambit: invent a system of thought that allows for other thinkers to think in new spaces for further intellectual talk, experimentation, and speculation. Prof. Lakoff would say the 8CB Model was a re-framing of various previous models.

The three main ways a Model becomes richer:
1.) Another thinker takes up the cudgel and elaborates on it. RAW did this most brilliantly in Prometheus Rising, in my opinion. Intellectuals with stellar synthesizing abilities have a field day in these novel mental spaces/models, even if only to display cleverness and erudition. I think RAW elaborated on Leary AND wowed us with his erudition. Most of Darwin's ideas were already in the air, or written down; his contributions to inchoate prior ideas were so monumental we rightly see him as genius, even though his maps had nothing about genetics in them...

2.) A thinker finds fault with the model in an INTERESTING WAY that suggest a new avenue of approach to some phenomena.

3.) A thinker basically agrees with the model, but strongly emphasizes what were "latent" or lesser ideas in the system, and they build upon the "old" system a new one. Does Jung as Freud's student qualify here? I think so, but others may disagree. Wilhelm Reich basically took Freud at his word and ran with it, and it seems like a "new thing" because Freud was maybe afraid to say it: if we're sexually repressed by social forces/Ego, maybe we need to get rid of the repression and not just accept it, etc...

And how does Crowley fit here? Sorry about the divergence...

I personally find the 8CB Model audacious, and I love to think with it, although I find many flaws. I have difficulties with a systems/process world of "reality" clashing with the implied individualistic aspects of the 8 circuits/systems/dimensions of Mind. Antero Alli's emphasis on systemic interconnectedness with different circuits - which was hinted at by RAW and Leary as far back as 1974, as Gathers has recently noted - functioned to make the Model seem more cybernetic in itself.

Maybe I need to maneuver in new ways. Hell yea I do...

It seems to me the neurogenetic and 8th/atomic are the least well-developed. The 8-ness of the model has seemed to me, at times, a product of shoehorning, and I think it was Bob Campbell who recently reminded me that RAW thought the Model would become extended to newer circuits, which just highlights the open-source-ness of the Model.

(Also: it's audacious but doesn't cover everything, although one could argue it as a sort of prolegomena to a Theory of Everything [TOE]. Just as we don't use a topographic map to find our way to a party in a city unfamiliar to us. Lately I've been wondering if the emotional component of discovery and reflection and speculation in Cosmology and subatomic quantum entanglement is best thought of as 8th circ. territory...)

For Leary moreso than RAW (in my current understanding): the "post-terrestrial" circuits 5-8 were in large part a way for his perceived audience ("tribe") to further distance themselves from the "larvals."

Tom Jackson's defense of the model on pragmatic grounds seems eminently reasonable to me.

Michael gets what I was trying to say. Perhaps if I had written "which I won't take the time to address now," Joshua would not have taken offense.

I do get a certain sense that eight is a shoehorned number, meant to tie into the Buddhist Eightfold Path and with the general Asian sense that eight is a lucky number. On the other hand, knowing you are working within certain parameters can stimulate thought and creativity. I've had the sense for years that the original version of "Twin Peaks" was successful partially because of the limitations imposed upon David Lynch by network TV -- he couldn't use bare female bodies, he had to tone down the violence, etc.

I read both of Mr Hotchkin's blog posts at the time, but they didn't add anything new to my perception of these models. I have to say I don't like his tone ('non-critical fanboys') and so choose not to engage. We had plenty of disagreements when studying the 8DM (8 dimensions of mind) in the Maybe Logic Academy, but with Bob's presence always around to keep us mutually respectful. I found it fun to haggle the terminology with people; to then study it all again with Antero Alli and the same gang of students, as Antero offered his own critique of Leary/Wilson, but in a way that ADDED something.
If nothing else, models offer us a common language and frame of reference for discussions.
So I wish him well, with promoting his blog, and selling his T-shirts, but recommend he read the section of Cosmic Trigger where Bob talks about the hazards of trying to make a living as a self-employed intellectual, and the importance of maintaining a sense of humour (humor). Peace Out.

re: the 8-ness thing: if you read articles and letters RAW wrote in places like Green Egg and New Libertarian in the 1970s, RAW was liking 8-ness to the Buddha path, Mendeleev, Pythagoras, and a few other things. His ingenium - a word I think RAW picked up from Vico that he liked - was fantastic.

The idea of imposed limitation in a creative endeavor is a really old one, and for good reason: it works. The entire OULIPO group based all their experimental texts on this idea. It seems tacitly a structuralist idea to me, which is cool. I think we can be structuralist in some things and post-structuralist/postmodern in others. We're (relatively) FREE AGENTS!

Toby's point about the part in CT where RAW takes on a topic far too often omitted by other writers: the life of the freelance artist/write/intellectual is usually a pretty rough one, and we need humor/humour to keep from sliding, (imperceptibly?) into Chapel Perilous.