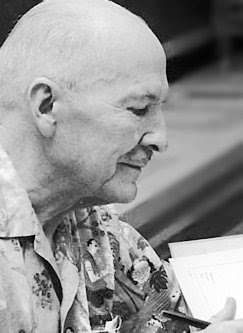 I have to approve all comments now (it's the only way to keep large volumes of rather vile spam from being attached to the blog posts) and occasionally I get a comment to an old post. Here is a comment posted on a post from 2012, in which I tracked down the exact science fiction convention in California where Robert Anton Wilson met Philip K. Dick and the two talked. The comment was posted Dec. 3 by "tinwoods":

I remember attending and getting Heinlein's autograph. It was late in the day and there were only two of us in line. The adult in front of me (I was 14) had two grocery store bags filled with hardcover editions for Heinlein to sign. And though the great author looked more than a little perturbed about it, he signed them all. When it was my turn, I sheepishly handed Heinlein's wife (who wrote all his salutations) my just-purchased paperback copy of Starship Troopers. She and her husband seemed relieved and grateful that I only had the one book, so were very nice to me, both engaging in a bit of small talk with me, but not the man before me. I sold that signed paperback on eBay in 2014 when I was desperate for money and got nearly four hundred dollars for it. It makes me wonder what that fellow's hardcover books, all first editions as I recall, are worth now.

I wanted to share the anecdote (RAW loved Heinlein) but also wanted to pose a question. I never met RAW, so I never got his autograph. (I finally met Robert Shea at a worldcon in Boston, but hadn't known he would be there, so I didn't have a book with me.) Does anyone have any stories to share about getting Robert Anton Wilson's autograph?

He signed my copy of WILHELM REICH IN HELL on my 23rd birthday, so that was cool.

I kept the check I used to pay for the Trajectories newsletter he endorsed to have his autograph.

He signed my copy of Borges Ficciones... as Jorge Luis Borges!

I only brought 2 of his books with me to his condo in Capitola, but he was happy to sign both of them, and I think he would have signed all of them, had I been like that Heinlein fan who brought far too many.

I like David Skelton's story, and wish I'd thought to have RAW sign one of my copies of Ulysses.

When Paul Krassner came out with _The Winner of the Slow Bicycle Race_, I went to see him give a talk in Santa Monica. Afterwords, I had him sign my book, asking him to pretend that I was an old friend who was with him in Chicago at the '68 Dem Convention. He wrote:

Fellow protestor in the war against insanity...

You were a great undercover nut!"

I think the best model for why we want the signature of an author we love has been covered by Psychology studies that show people not wanting to wear a sweater after being told Hitler wore it, or wanting to touch an ordinary pen when told it was owned by Einstein. Children who bring their most beloved toy or doll to a study have it put into a "replicating machine" (which is fake, but looks cool, apparently): they are told they can have the EXACT replica of the doll that came out the other side (it's the kid's doll they brought in), or their original one they brought in. They ALWAYS want the one they brought in, not some "fake." Psychologists who've studied this tend to think this means humans believe in a sort of "essentialism" - the "essence" of Einstein is right there in your hand!

Having a signed book is a way of extending our lives "out" and "into" an admired person's life, somehow.

I'm not sure I buy this interpretation, but it's the best I've seen yet.

I read an interview with Steve Martin years ago in which he explained that when someone asks him for an autograph, he hands that person a business card. Martin said he figured the person just wanted proof that he or she had met Steve Martin.

I remember Bob saying he didn't like signing autographs. In 2000 Richard Bandler brought Bob to Anaheim for an NLP seminar. Richard kindly invited any of Bob's friends to attend Bob's portion of the workshop for free. I brought along a copy of _Cosmic Trigger III_ to read if I had any down time. When I met Bob, he automatically took the book and autographed it, even though I didn't ask him to nor did I intend to ask him to. He just kindly autographed it.

My great inscription story is from Shea.
I'm namechecked in his novel All Things Are Lights, and he inscribed my copy, "To Neil Rest, who helped illuminate the author."
I was floored, but had absolutely no idea what he was talking about, so I said so. He said that I had been the first person to tell him that as a professional writer he should be using a microcomputer, and his next several novels were written on an Apple II.