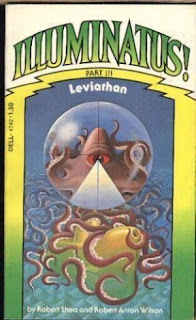 Here is the first paragraph of "The Google-Facebook Duopoly Threatens Diversity of Thought" by Mark Epstein, published on the editorial page Monday:

"A monopoly on the means of communication," Robert Shea and Robert Anton Wilson wrote in "Leviathan," their 1975 novel, "may define a ruling elite more precisely than the celebrated Marxian formula of 'monopoly in the means of production'." Bear that in mind when you hear this next statistic: In 2017 Google and Facebook have accounted for 84 percent of all digital advertising outside China, including 96 percent of its growth, according to an industry forecast this month, from Zenith, Magna and GroupM.

The rest of the piece develops Epstein's argument that the duopoly threatens freedom of communications. Michael Johnson's 2011 censorship hassles from Google suggest there is something to Epstein's complaint.

Here is a book review which explains more of Epstein's views.

I was thinking the other day about how profoundly STUPID that censoring of my blog was. And apparently these monstrously huge platforms don't really give a crap about free speech; apparently it's only going to get worse.

I had accrued some Adsense $$ - a tiny amount, but I need any little bit - and the "sex" aspect that I was writing about could be seen on daytime TV. Say: Oprah's show. But THAT was too much for the Google Adsense cop, whose writing to me felt like they'd hired someone with a 9th grade education and ZERO understanding of free speech.

Google took my money because I refused to back down. I'm sure they needed it.

(Illuminatus! is bylined Shea and Wilson. I wish I'd ever gotten around to asking if they flipped a coin or it was from Shea's idea, or what, but his name's first.)