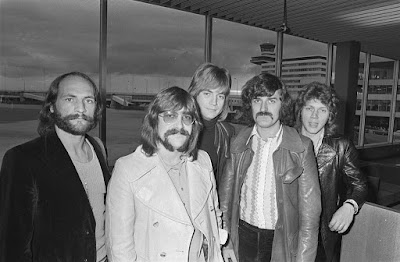 The Moody Blues in 1970. Creative Commons photo from national archives of The Netherlands.

Most of the bands inducted Wednesday into the Rock and Roll Hall of Fame in Cleveland have no connection to this blog (although one, The Cars, is a personal favorite of mine), but one of the inductees, The Moody Blues, deserves a mention.

The British band, after all, did a rather good song, "Legend of a Mind," about Timothy Leary. Some of the lyrics:

I always kind of wondered what Timothy Leary thought of the song, so I queried two Leary biographers on Twitter. No word from John Higgs, but R.U. Sirius wrote back:

"So I think Tim was pleased to hear the song as I recall. There's this story that was told in Rolling Stone by some Moody Blues members that people thought it was some heavy message and they were actually 'taking the piss out of him'  Tim was the only one who recognized that and they had a good laugh together over it..."

"When You're A Free Man" was another song about Tim Leary by The Moodies.

"The music was typical Moody Blues, wide-ranging in tone and volume, swelling in rock sonorities. At a moment of pop-celebrity like this I marvelled at the acculturation process, which converted my pedantic philosophic-neurological concepts into themes which would be listened to by millions. There was no denying that this sort of thing was powerful advertising for altered states and multiple realities."
-p.272 of my old beat-up copy of _Flashbacks_ Leary says the lyrics "were to become a personal theme for the next few years."