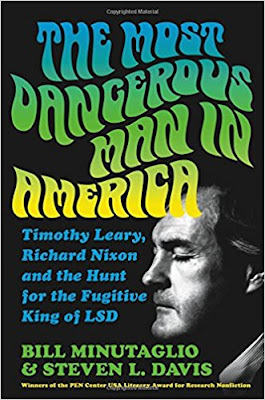 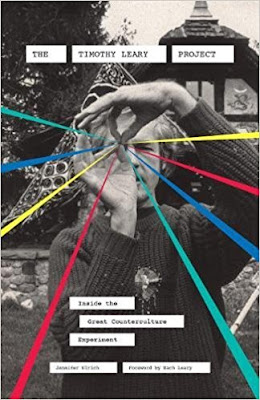 The New York Times runs a review of The Most Dangerous Man in America: Timothy Leary, Richard Nixon, and the Hunt for the Fugitive King of LSD by Bill Minutaglio and Steven L. Davis. The reviewer, John Williams, apparently not a Leary fan, writes, "It’s fine for many of the more well-known historical events here to serve as understated commentary on today’s world, but the present-tense immersion in the proceedings means that complex social and political issues mostly pass by as background blur. What’s left is a chase in which we end up half-rooting for the escapee to get caught. Much like Leary himself, the book is plenty of zany fun right until it’s not." The book comes out on Jan. 9.

Meanwhile, The Timothy Leary Project: Inside the Great Counterculture Experiment, edited by Jennifer Ulrich, will be out on April 17 next year and has material from the Leary archive at the New York Public Library.

Here is the publisher's description: "The first collection of Timothy Leary’s (1920–1996) selected papers and correspondence opens a window on the ideas that inspired the counterculture of the 1960s and the fascination with LSD that continues to the present. The man who coined the phrase “turn on, tune in, drop out,” Leary cultivated interests that ranged across experimentation with hallucinogens, social change and legal reform, and mysticism and spirituality, with a passion to determine what lies beyond our consciousness. Through Leary’s papers, the reader meets such key figures as Allen Ginsberg, William S. Burroughs, Ken Kesey, Marshall McLuhan, Aldous Huxley, John Lennon and Yoko Ono, and Carl Sagan. Author Jennifer Ulrich organizes this rich material into an annotated narrative of Leary’s adventurous life, an epic quest that had a lasting impact on American culture."

I have put online some RAW Letters to Leary
... more Leary correspondence can be found here