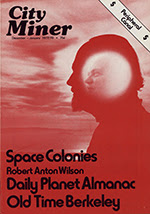 I want to follow up on Monday's blog post about the new German language RAW site by the doughty Austrian RAW fan, Martin Wagner, with something that may interest many of you.

The English language section of the site has an interview with Robert Anton Wilson that is NOT available at RAWilsonfans.org, a 1977 interview with RAW by Michael Helm published in City Miner.

Special attention is paid to the possibility of space migration and space colonies; the colonies RAW talks about  remind me of the orbital cities in Neal Stephenson's recent novel, Seveneves.

But there's also discussion about agnostic mysticism and RAW's contention that free speech rights are for everyone, even Nazis. RAW's discussion of TV also seems prescient. And there's a good discussion of RAW's understanding of Karma:

Robert Anton Wilson: I would say that there is a circular causal chain of karma. Leary once stated the part that seems most paradoxical to straight people, "You can’t do good until you feel good." Which I think every mystic knows. This is why they’re so tolerant. They know that most people feel bad most of the time; they understand why people behave badly and they forgive them. When you start feeling better, you act better. The corollary to what Leary said is that you can’t really feel good until you start doing good. You can feel better than most people do in our society, but you won’t feel really deep down good until you start doing good. I think one of the bravest statement of the 1970’s was made by Norman Lear in a Playboy interview when he said, "I’m an old-fashioned, bleeding heart liberal." That is so corny and so kitsch and so camp and everybody sneers at that kind of thing. But if you’re not a do-gooder you don’t really appreciate life. That’s the secret of secrets. You don’t really know what it’s all about, As Obi Wan Kenobe said to Darth Vader in the novel, not in the film, of Star Wars, "You only know the Force as the glass knows the wine. You haven’t tasted it." Once you’ve tasted … the fountainhead of OK, I’ll go ahead and be pretentious, Infinite Love, there’s nothing that compares to it. You’ve got to see both sides of it you can’t do good until you feel good and you can’t feel good until you do good.

Very glad to have the likes of Martin Wagner on our team. TWO Wagners now as RAW scholars...

...which reminds me: I was looking through an old used bookstore the other day, and in the music section I happened across a book on the composer titled _Penetrating Wagner's Ring_, which I almost bought simply for the title.