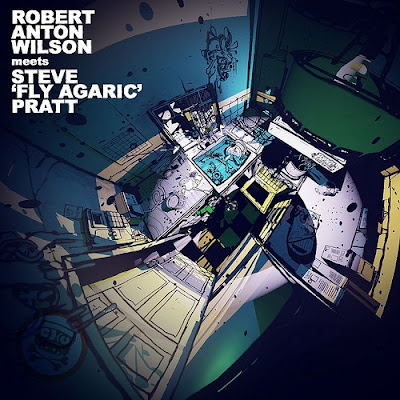 The album succeeds on both levels. The music is quite good and you can focus on that if for some reason it is not convenient at the moment to concentrate on the words.

And the interview is meaty: While some of the topics Steve asks about cover familiar topics, he obviously worked hard to come up with new, fresh questions. (It's the only time I've seen or heard anyone ask Wilson, "What is your favorite sound?" This is a substantial interview.

You can read Steve's detailed online notes on the background of the interview, if like me you bought MP3 files of the album instead of buying the CD.


When I asked Steve if there were any detailed notes available anywhere for the musical credits for the tracks, he went to the trouble of putting them together for me. Here they are:

01. LSD.
Bob Acid by Steve Fly, feat. samples by Tim Egmond, Michael Ray (trumpet), live drums by Steve Fly, together with an excerpt from ‘Lonely No Longer’ by Youth. 2014.

02. Cannabis.
Music by Steve Fly, taken from the ‘Alan Moore discusses Robert Anton Wilson DVD, which was a perk of the Cosmic Trigger Play crowd-fund campaign. 2014.

06. Satori Game Theory.
Drums by Steve Fly from the album ‘I mean you’, followed with excerpt from  by ’Suspended Atmosvex Pt2’ by Youth. 2014.

07. World Game.
Drums by Steve Fly taken from ‘I mean you’, together with an excerpt from ’Black Mass’ by Hagbard Celine (Ameoba) 2014.