Too bad he didn't get a byline! 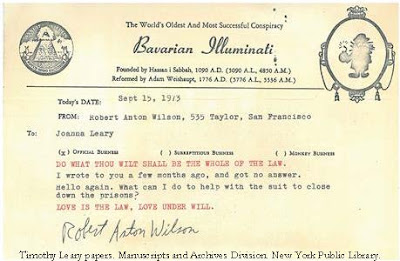 On his blog, Supergee links to J. Christian Greer's 2014 piece on "Timothy Leary as Illuminatus!" It's an examination of Leary's correspondence with Robert Anton Wilson, using the Leary archives at the New York Public Library. The library left off Greer's name, but it's him.

It's a piece I eventually realized I had linked to and written about before,  but it's such a good piece, you really should read it if you haven't. It's worth a "rerun" blog post.

[After explaining that Wilson and Leary had met a few times previously].

"It was the prison letter exchange, though, that laid the foundation for their decades-long friendship, during which they co-authored books, developed a psychologized form of esotericism termed “the 8-Circuit Model of Consciousness,” and collaborated on “stand-up philosophy” tours throughout the United States. Financial difficulties prohibited the Robert Anton Wilson estate from maintaining a posthumous archive, and thus the Leary papers at NYPL represents not only an essential resource for Wilson’s work, but also acts as one of the few repositories of Discordianism’s material history."