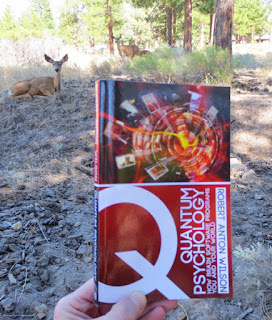 A photograph of the new print edition of Quantum Psychology, in northern California

Hilaritas Press, the publishing imprint of the RAW Trust, has just issued the new print edition of Quantum Psychology. The announcement is in the latest RAW Trust newsletter, available here.

For those of you who tuned in late, RAW's estate has been publishing new, definitive editions of his works, both in print and as ebooks. So far, Cosmic Trigger I, Prometheus Rising and Quantum Psychology have been issued, in both formats.

The new edition of Quantum Psychology features a new introduction by David Jay Brown, and also an index of names and bibliography by Charles Faris, who is currently leading our online discussion of Cosmic Trigger I.

Email to the Universe is planned as the next volume.

The newsletter also has an announcement that a new auction is planned for some of Robert Anton Wilson's personal effects, including clothes that he wore, books that were in his library, art objects from his home, and so on. No date for the online auction has been announced, but see these details from Christina Pearson.  I will post an update when it becomes available.

What I want to know is when the famous ring is going to be on sale, and how much it will go for. : )

We realize that whatever we do is a statement. Whatever conscious decision we make is a statement because it tells other people something. You see a woman walking wearing bright red lipstick; she’s making a statement. See more statement of purpose writing