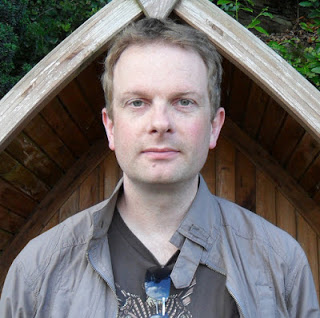 Back in July, British author John Higgs, just endorsed in the New York Times by Alan Moore,  kindly did a guest posting for our ongoing Cosmic Trigger online discussion group, and wrote about how Daisy Campbell faced a difficult problem in her stage adaptation of the book — how to explain the eight circuit theory without bogging down the action of the play. As he demonstrated with a video clip, she took a daring but successful approach:

"Yeah, that’s right, she turned it into a song and dance number with the personal dramas of other prisoners utilised to illustrate eight circuit theory, and she threw in a Beastie Boys reference to keep it light. She basically had a creative problem that was extremely difficult, and she solved it by making her task much harder. This is similar to the approach Alan Moore took with the chapters in the last third of his epic novel Jerusalem, where he designed every chapter to be essentially impossible to write in order to keep things interesting, for himself as much as for his readers. Sometimes wild ambition is the only sensible approach."

Later in the piece, Higgs returns to the idea:

"Do we lack the intelligence to imagine a future worth building? Here I think Daisy Campbell’s staging of this chapter, and Alan Moore’s approach to writing, can help us. When you have a difficult path ahead, intelligence alone isn’t enough. You need ambition too. Leary knew that, when he took the baton from Crowley.

"When you look over Bob’s work, it is striking that no book he wrote was easy – both in terms of explaining what it is about, as well as the challenge of actually writing it. There was a level of ambition to his books, which raised them above the general tone of the 70s counterculture and which is why we are still talking about them today. You can see why Tim Leary like Bob Wilson so much."

I wanted to note here that Robert Anton Wilson's most popular work, Illuminatus!, also was his most ambitious. It was so ambitious that Dell didn't know what to do with it at first after buying it, and finally cut it and divided it into three pieces. One of my other favorites, and the favorite of many of Wilson's readers, The Widow's Son, also is quite ambitious in structure, with an unusual use of footnotes that cite spurious sources as well as real ones.