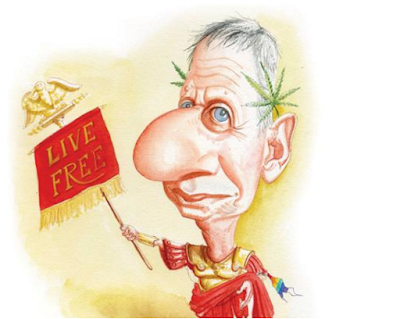 I enjoyed this Roman Genn caricature of Gary Johnson that ran recently on the National Review website, which I ran across because of my habit of reading Kevin Williamson.

Arthur Hlavaty has a blog post up musing about how he is a "recovering libertarian."  Like other posts about Johnson lately, the post references a 2011 comment Gary Johnson made about climate change. (If anyone is interested, a 2016 update is available at Reason. I personally like the idea of a carbon tax.)

And then I saw Michael Johnson's remark in the comments in the last Cosmic Trigger reading group post about "The idea that, historically, you had to evolve to a sufficiently wealthy/comfy leisure class in order to activate a enlightened hedonism and Mind Your Own Business-ism? That makes a ton of sense to me."

Arthur's post remarks on how libertarians have won, at least in part, as society has relaxed many of its rules about sex, drugs, getting an abortion, etc.

But did these rules ever apply to the rich, or just to ordinary people? Did rich people ever lack access to abortions? Did Jack Nicholson ever have to worry about being busted for smoking pot? It seems to be that libertarianism could at least partially be defined as taking the freedoms that rich people have largely enjoyed and attempting to make them available for everyone. And I would guess that being a "progressive" might mean providing a measure of economic security for everyone, not just folks who have money.

Just tossing that out there.

For me it has always been about Circuit 3 (which I love) vs. Circuit 2 (which I hate). I would love to live in an Isaac Asimov universe where those who use political means (strongest, pushiest, loudest, most numerous) lose to the side that has the best map of the situation.

Arthur--I have this theory that the circuits you hate are the ones's you aren't very good at. Bob spilled a lot of ink criticizing circuit 2, and yet he seems such a well balanced 2 to me, and he uses it well to back up his circa 3 ideas. A way that I like to look at it is as a certain gravitas--a physical confidence.

Of course I hate the one I'm not good at,although I'm also no good at 5-8 and I ignore those. I like Leary's map because it put all the stuff I despise about being an animal in one place.