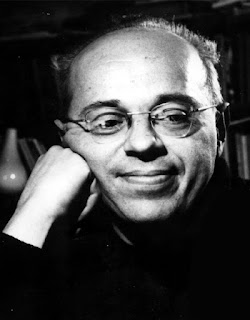 Yesterday was the birthday of Stanislaw Lem (1921-2006), the famous Polish science fiction writer.

Lem's interactions with Philip K. Dick, a writer many Robert Anton Wilson fans also enjoy, were interesting, as this article from last year by Matt Davies from Culture.pl recalls.

Lem was famously hostile to American SF, insisting to the point of absurdity that it was all junk. (In hindsight, this feels like jealousy that he was ignored in the U.S. for years while becoming famous in the rest of the world. His resentment, if that's what was happening, seems understandable). The one exception Lem allowed was Dick. Lem thought Dick was "A Visionary Among the Charlatans," as Lem put it in an essay.

Dick repaid this praise by writing a crazy letter to the FBI in 1974, revealing to the feds that Lem, “probably a composite committee rather than an individual," was the main force behind a Communist conspiracy to control American minds.

Even then, it was pretty easy to figure out that Lem was an actual person. It's also an odd conspiracy that depends upon getting Americans to read a Polish science fiction writer in translation. I made a point of reading some Lem and enjoyed his work, but I doubt most American SF readers bothered. Science fiction fans with literary inclinations did read him, but I never saw any sign that Lem developed a mass following in the U.S.

Dick also made crazy accusations about Thomas M. Disch, as this piece notes.
on September 13, 2016

Ye gods and little fishes! Last night around midnight, unable to sleep, I decided to read something. For some reason (!) I picked up Lem's "Memoirs of a Space Traveler: Further Reminiscences of Ijon Tichy" and thoroughly enjoyed the first story in that collection, "The Eighteenth Voyage." I had NO IDEA it was Lem's birthday, nor have I reread any Lem in YEARS. The book I had just finished the day before was PKD's "We Can Build You."
CoinciDANCE!!!

(apologies for all the caps, but considering my (random?!) reading choices, your post rattled me a bit).

And, I read Roman's comment after reading RAW's "Cosmic Trigger" explanation of why synchronicity might be "real."