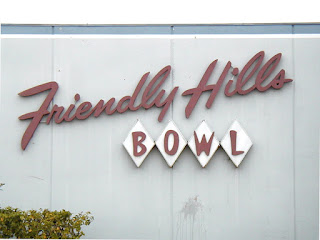 The former Friendly Hills bowling alley in Whittier, Calif., an important landmark in the history of Discordianism, is being preserved and rehabilitated and will reopen later this year as a commercial building.

Although it will no longer be a bowling alley, the historic integrity of the building that's the alleged birthplace of Discordianism will be preserved, along with the bowling alley's distinctive sign.

Friendly Hills shut down in June 2015. As I reported last year, that's significant, because according to Discordian history Adam Gorightly, the Friendly Hills is the "Brunswick Shrine," the most likely place, according to Adam, where Kerry Thornley and Greg Hill created Discordianism.

However, a developer stepped in to save the building from the wrecker's ball. From my story last year, for which I interviewed Don Dooley,  planning services manager for Whittier's planning department:

"The new developer, Dan Almquist, has been acquiring the building and is turning it into a three unit commercial building. The existing bowling sign outside will be adapted for reuse, said Dooley, who serves as the secretary for the Whittier Historic Resources Commission, the city body charged with preserving Whittier's historic buildings.

I asked Mr. Dooley how work is coming along, and he sent me this email update on July 6:

"Building permits for the rehabilitation and adaptive re-use of the former Friendly Hills Bowl Building were issued by the City of Whittier on March 25, 2016.

"Grant Construction is the general contractor doing the rehabilitation work to the building.  Once completed, the former Friendly  Hills Bowl Building will be converted into three retail tenant spaces. At this time, two of the three tenant spaces will be occupied by Aldi (similar to Trader Joes) and BevMo (a large beer and wine outlet, similar to Total Wine and More).