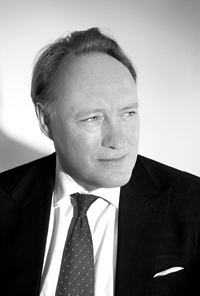 Did the Allies win World War II because of the SNAFU principle?

I've been listening to an audiobook of Andrew Roberts' history of World War II, The Storm of War, and while I originally assumed it had nothing to do with this blog (I read a lot of books that have nothing to do with Robert Anton Wilson or his ideas) I realized there was a possible connection.

As stated in Illuminatus!,  the SNAFU principle is "communication is possible only between equals." in Prometheus Rising, Wilson says this is an over-simplification for satirical purposes, and offers the following more precise "law":

Adequate communication flows freely between equals. Communication between non-equals is warped and distorted by second-circuit Domination and Submission rituals perpetuating communication jam and a Game Without End.

Hitler arguably lost the war because nobody could tell him anything; he ignored good advice, for example, to build a large fleet of submarines before the war, to allow the German army to break out of Stalingrad rather than allow itself to be captured, to call off the Kursk operation when it became obvious the Russians had prepared for it for months, etc.

Nobody could tell Stalin anything, either. The dictator ignored reports that the Germans were about to invade on June 22, 1941. This led to enormous losses early in the war that were largely unnecessary. In the end, Stalin may have won because he had enormous resources that could overcome his mistakes.

Roosevelt and Churchill, by contrast, could not simply have people shot when they heard advice they wanted to disregard. For political reasons, they had to avoid making serious errors. So, Roberts writes, they set up committees to provide advice on the operation of the war, and all opinions could be debated. The Americans wanted to invade France early in the war; this could have been a disaster, and the British were allowed to persuade their allies to postpone the operation. There were mistakes made, such as the Dieppe Raid, Roberts argues, but none were big enough to affect the outcome of the war.

Neal Stephenson, in Cryptonomicon, offers similar comments about an American advantage in the war: Bad news could be delivered without serious consequence, and therefore it was possible to have a rational discussion about setbacks and figure out how to overcome them.

Roberts' book was favorably reviewed several years ago in the New York Times, calling it to my attention. It's a pretty good military summary of the war, although flawed in that he downplays atrocities committed by the allies and cannot seem to grasp why Ireland might have chosen to remain neutral.

The Britsh screwed over Ireland for centuries, the memory of the Famine and its consequences - starvation and immigration - were still raw, they sent the Black and Tans to Ireland who destroyed and killed with impunity. The Irish had many reasons to avoid the embrace of perfidious Albion during WW2. Many Europeans now have the same viewpoint, especially after Brexit and football hooligans in the streets of their streets.The Japanese have an expression Shimakuni konjo - it means Island person Mentality - It fits most of the British pretty well.

Thank you! I've found what i need. I constantly wanted to write on my site something like that. Could i may have this post in to my site