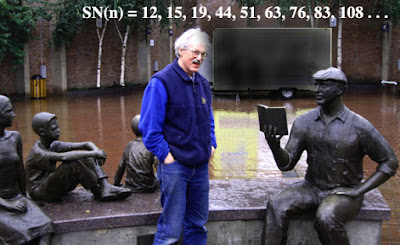 For an explanation of the photo, see Nick Herbert's blog post.

If Saul-Paul Sirag is a name that should be familiar to many of the readers of this blog. He's the guy who wrote the afterword to Cosmic Trigger. He was friends with Robert Anton Wilson and fellow "hippie physicist" Nick Herbert.

Herbert and Sirag are still chums, and Herbert has just posed a nice piece about his friend on his blog, Quantum Tantra, "Saul-Paul Sirag's New Math Book."

The math is pretty much over my head (as in, 99.9 percent over my head) but there are lots of lovely anecdotes about Sirag, such as this one:

Energized by 1960s Berkeley, Saul-Paul moved to New York City where he reviewed books, wrote and acted in plays at La MaMa in the East Village, participated in an Andy Warhol Fashion show and, by his own account, inspired a Broadway hit: "Jerry Ragni, who wrote Hair, told me that he got the idea while watching me dance to the Grateful Dead in the East Village." Ah, Saul-Paul Sirag: woolly-headed icon of the Age of Aquarius.

UPDATE: I forgot to give credit. I first heard about this from Roman Tsivkin on Twitter.