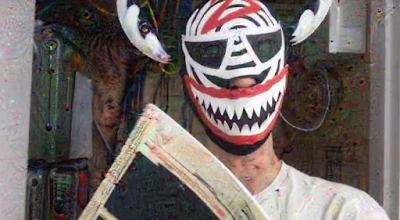 The screenshot, above, is from the promotional video for the book, posted at the Indiegogo page for the new title, which says,

Presented as Bloom's military dossier detailing the surveillance of a mysterious group of occultists known only as 'The Discord Magi', #DiscordianProblems documents Bloom's slow decent into madness (or his ascension into Illumination. I mean, who the hell are we to tell you how to interpret what happens to the poor guy...)

#DiscordianProblems is broken down into 5 discrete sections; ESPionage, the MindFrick comic book, Discord Magick, No One Expects the American Inquisition, and The Celebrity Discordian Menace.