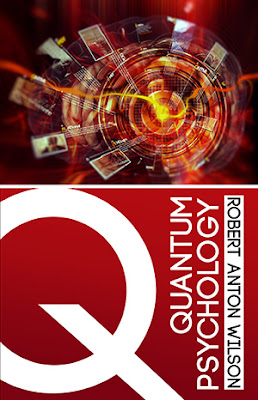 The new Hilaritas Press ebook of Quantum Psychology has been released by the RAW estate, with a new print version to follow in a few weeks. Full announcement here.

The book features a new introduction by David J. Brown, and Charles Faris and Nick Herbert helped to correct errors to make this the most authoritative text to date.

With an insightful perspective, David Jay Brown, a close friend to Bob, offers an overview of the themes in his new Introduction to Quantum Psychology.

"Robert Anton Wilson had a remarkable talent for leading readers to question assumptions that they didn’t even know that they had, and redefine their unconsciously-constructed notions of reality. He had an uncanny ability to lead his readers, unsuspectingly, into a mutable state of mind where they are playfully tricked into “aha” experiences that cause them to question their most basic assumptions about what is real and what isn’t."

Thanks once again for a great cover from Scott (amoeba) McPherson!

A special enormous amount of gratitude goes to Charles Faris, who poured over Quantum Psychology like a detective uncovering OCR errors & typos, but also a number of old misprints that went uncorrected for years. Chas found the time to do a thorough proofreading of Quantum Psychology while he was in the middle of conducting rawillumination.net's current Cosmic Trigger Reading Group. Do check in with the reading group for a fascinating exploration of Bob's journey through Chapel Perilous. Don't ask us how he did this, but in addition to the above, Chas volunteered to build an Index of Names and a Bibliography for Quantum Psychology that have been included to this new Hilaritas Press edition.

Another thank you goes out to physicist and Intelligence Agent Nick Herbert who came to the rescue by helping us fix a broken paragraph in Quantum Psychology that probably left thoughtful readers perplexed for years. We suspect that words were misplaced when the original manuscript was typed out for the previous publisher's initial release. We are THRILLED to have the opportunity and generous expertise required to improve Bob's books!

After you buy the book, try the online reading group archived on the right side of this page.

It was a privilege to work on cleaning up the text for this book. The least I could do to honor the debt I owe to Bob.

The psychiatry personal statement is a useful site. where you can get all what you wants.