Leary (and RAW's) The Game of Life, with the RAW bits pointed out 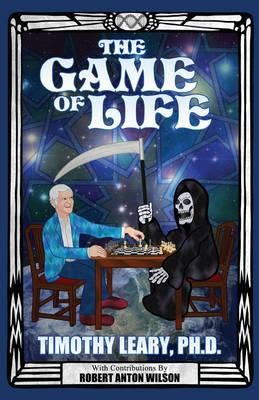 A few days ago, I went to Amazon and bought the ebook of The Game of Life by Timothy Leary, which features contributions by Robert Anton Wilson. It only cost about $6, and it featured a cover by Bobby Campbell. It's listed as "Future History Series, Vol. V," and the credits include (among others) "Written by Timothy Leary" and "Historical and Scholarly Scripts by Robert Anton Wilson."

I downloaded a  PDF of the Peace Press-Starseed edition from the Internet Archive to figure  out which bits in the ebook are the RAW bits. Here, for your reference if you buy the ebook, are the bits RAW wrote, using the Kindle equivalent to page numbers, location numbers. These locations are approximations, but should get you close enough to find the quotes that begin and end the RAW sections.

Location 183 (beginning with "Intelligence Clues Sought" to location 251 ("Who is the movie Director who makes the grass green?")

Location 278 (beginning with "A grab bag of unrelated facts") to location 285 ("Decoding the grand strategy of the Game of Life.")

Location 340 ("As Korzybski notes in Science and Sanity") to location 387 ("In all of these periodicities we see structure as a basic fact not in space but in space-time.")

Location 424 ("The synergetic combination of pain-and-dope will prove to have much explanatory value to future exo-psychological historians and biographers") to location 450 ("The DNA code is the tape-loop of the Game of Life.")  [The ending has to be inferred, unless you think it makes sense that RAW's bit ended in mid-sentence.]

Location 508, "PYNCHON JOINS DANTE JOYCE CLASS" to location 510, "The Tarot is the hieroglyphic key to stages of evolution."

Location 517, the quote beginning with, "The reader is invited to consider the specifics of research on Chromosomal Proteins ...."

Location 527, "HINDU-VICO CULT GETS NOWHERE" to "The cycle is Finnegans Wake is actually an upwards DNA spiral rising to the stars." (Note: The ebook version moves Wilson's next sentence, " 'Many ... Tickle ... Forsin' puns (among other things) on "Mene Mene Teeckle Upharsen," the Cabalistic cryptogram announcing the Fall of one civilization, the Rise of another," to the wrong location.)

Location 717, "THE NEUROGENETIC THEORY OF EVOLUTION DEFINES TWELVE LARVAL AND TWELVE POST TERRESTRIAL STAGES OF HUMAN EVOLUTION" to the paragraph that begins, "These three functions are based on the structure of the synapse itself."

Location 864, "DIRECTED PANSPERMIA ..." to "Tom and I hate ALL this stuff." [A nice synchronicity, as that is how I felt trying to wrestle this blog post into submission.]

Note that the RAW material ends on page 61 of a book that has 294 or so pages (the appendix of the PDF does not have page numbers). So after you get past 22 percent of the ebook, it's all Leary. It looks as if Wilson got ahold of the manuscript and inserted bits of material as the spirit moved him, then stopped at a certain point. I would welcome any information available as to how the book was put together.  And what exactly was publisher "Peace Press-Starseed"? Who set it up, and what else did the publisher put out?

I did notice some typographical errors and bits of text moved to the wrong location in the ebook, although in fairness to New Falcon, the original text is a hodgepodge of various text sizes and illustrations and could not have been easy to scan.

I am also curious if there are any significant differences between the Peace Press-Starseed edition and the New Falcon edition that has been in print for years.

I'm going to use this blog post as a reference when I read my ebook, which I expect will be soon. My thanks to Charles Faris for his help with this, although any mistakes are on me.

Email ThisBlogThis!Share to TwitterShare to FacebookShare to Pinterest
Labels: The Game of Life

I don't think I would ever mistake you for Tom Hayden.